There are many ways to share your expertise during a psychiatric residency. One opportunity you might not expect is the prospect of converting a communal space into something more useful and engaging. But that is exactly what residents Jeremiah Atkinson, MD (PGY2), A. Irem Sonmez, MD (PGY3), and Brianna Engelson, MD (PGY3), volunteered to do. After securing permission from department leadership – and with the support of Department Administrator Barb Daiker, PhD, RN; and Residency Program Administrator Rachel Talcott – the team got started. 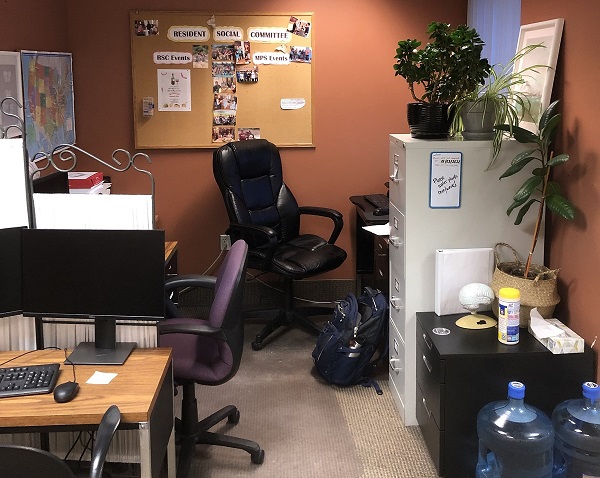 The space they wanted to convert was the room set aside for residents’ use in the West Building on campus, which had never actually been designed for how it was being used. It was a tangled mess of filing cabinets, random pieces of old furniture, a treadmill (at one point), and a few computer workstations.

Making it modern, functional
Pandemic-driven restrictions on the use of certain spaces, which drove more people to use the room in question, plus the organic growth of the residency program, proved too much for the space to handle. The resident team wanted to modernize it and make it more functional. 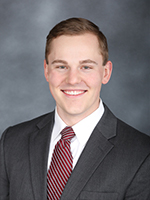 “Before the pandemic, individual residents and one to two medical students would sit in conference rooms on the inpatient psychiatry units,” explained Atkinson (pictured here). “The resident room was often used by residents on other rotations in the hospital or during evening shifts. It wasn’t really used for chart checking or pre-rounding or other clinical and educational opportunities. When we transitioned back to in-person care during the pandemic, however, we started using that room as our main workspace.”

Overused space
That meant that every morning three clinical teams – each composed of three residents and one or two medical students – would meet in that room to read about and discuss their patients, according to Atkinson. “We also teach in the room,” he said. “We help medical students write their notes and give them coaching about their interview skills.”

With just five computers in the room, medical students would have to sit on the couch or in other chairs working on their laptops. “Getting more workstations into the room will help us be more like a functioning clinical team,” said Atkinson. “We also wanted to remove the filing cabinets to open the space up for more collaboration.” 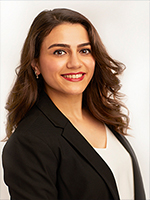 Wellness aspect
In addition, the room’s renovation has a wellness aspect, according to Sonmez (pictured here). “The current room was too eclectic, and the space wasn’t welcoming or peaceful,” she said. “The way people worked in that room wasn’t ergonomic, either. We wanted the space to be easier to work in and for people to be happy to be there and easily focus on their work.”

The team didn’t want to do this project in a vacuum. “We surveyed the other residents about what they wanted to see in the redesigned space and then looked at how they ranked each answer,” said Sonmez. “Based on how popular an item was, it was assigned a score. That became our guide.”

In addition, the team looked at how lower ranking desires could be met, according to Atkinson. “There is a second room adjoining the larger space where we wanted the kitchen table and chairs and a sofa to be,” he said. “The other needs expressed by the residents could potentially be met in that space.”

To update Department Head Sophia Vinogradov, MD, PhD, on their progress, Sonmez and Atkinson had measured the spaces and showed her how they wanted to use them. “I created an initial rendering of what we wanted the entire space to be using 3D software,” said Atkinson. “It helped us build realistic expectations.” 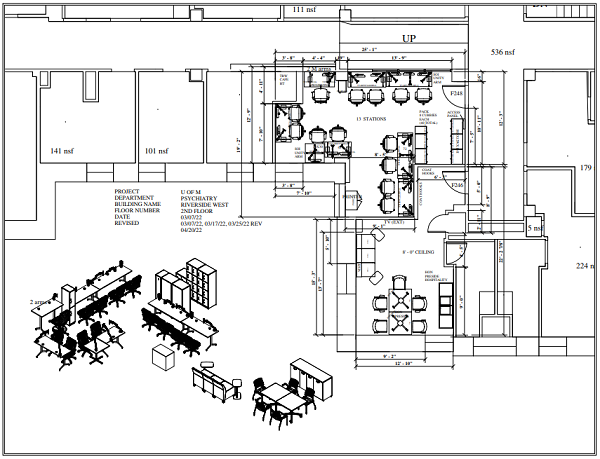 They worked with a design partner from the U of M to help them choose things like floor coverings and wall colors. “We could use an accent color on one wall in the workroom and decided that color would be green,” said Sonmez. “For our kitchen area, we chose red for the table and chairs … it stimulates appetite.”

Collaborative process
From the wall colors to the new flooring, and everything in between, the residents were able to provide input for their new space. “Having three people helped break ties and made decision-making easier,” according to Atkinson. For the furniture and metal fixtures, the team relied primarily on silver, gray, and black.

When the space reopens around Labor Day, there will be immediate improvements in how it’s used, thanks to the collaborative – and iterative – approach taken by the renovation team. “We work with a couple of different attendings, and they all have different styles,” said Atkinson. “One likes to pre-round in the room before going to the clinic ward. That was hard to accommodate when other students and residents were in the room. The redesigned kitchen-oriented room will serve as a more private mini conference room for such activities.”

There will be 13 workstations in the new space, plus more seating in the kitchen area. The team also replaced the filing cabinets with more space-efficient locker stacks for personal storage such as books and snacks.

Waiting to do more
Making additional decisions about the space will have to wait until after it’s been in use for a while. “We haven’t decided about wall art yet because we wanted to give the room a trial run before we started ordering white or bulletin boards or coat hooks and bookshelves,” said Atkinson. “We want to get a feel for how the room worked.”

Sonmez is sure about one thing. “We envision a lot of plants,” she said. “We are trying to maximize the light in the room and made sure workstations wouldn’t cover the windows.”

The team agrees that being in the resident room together instead of staying on the units all day provides the opportunity for better education of medical students, allows residents to use each other as resources for peer-to-peer teaching, and improves the sense of community.

There couldn’t be better reasons for a renovation!