In September 2021, many in the Department were shocked and saddened to learn that Dr. Michael Daly had passed away. Dr. Daly was a faculty member in the Department of Family Medicine and Community Health beginning in June of 1973 until he retired in June of 1995; he served as the University Unit program director for many of those years. The University Unit ended in 1998 when it was integrated into the University of Minnesota Medical Center Family Medicine Residency Program (Smiley's).

"Dr. Michael Daly was one of the key faculty physicians for the first two decades of the Department of Family Medicine and Community Health," shares Macaran Baird, MD, MS, former department head and current professor emeritus.

"He was widely known as an enthusiastic educator and astute clinician. He loved to share stories as an appealing teaching tool and was admired for his dry wit. As one of the early core faculty, he helped forge a strong department during the era when departments of family medicine were first being established within academic health centers around the U.S. Dr. Daly deserves recognition as one of our DFMCH pioneers."

Dr. Daly dedicated himself to his patients, his colleagues, his trainees, and his family—something that his former residents remember fondly.

"Mike was a great, supportive, warm, and compassionate mentor, role model, and academic guide," says Charles Q. North, MD, MS, Department of Family Medicine and Community Health resident from 1974-1977. "He had a great sense of humor, a necessary quality in any program director, and made us all feel at home in a very complex and challenging residency program. He was also a role model family man and made it clear that we could become family physicians and raise a family."

Dr. North continues with a couple of memories:

"Mike had practiced in rural New Hampshire, I believe, and told a story once about a home visit with a patient who had moved from Vermont. He lived alone and didn't have a phone. One day Mike visited him, and he had installed a telephone, much to Mike's surprise. While they were visiting, the phone rang, and his patient made no move to answer it. Mike asked why, and he said, 'I got that phone for my convenience!' I think of this in the exam room when my patients haven't silenced their cell phones.

"Another time, during residency, one of our colleagues who was married and had two children was struggling with his personal life. Mike and he met frequently, and I wasn't sure what was going on. It turned out that my fellow resident was gay and decided he had to come out. This was before it was widely acceptable; gay physicians had to deal with serious and unpredictable discrimination. Mike was wonderfully present and supportive of him as he went through a divorce and finished the residency. I was greatly impressed with his ability to help my colleague find his way in a very uncertain world. Mike taught us a lesson about being open, compassionate, and kind." 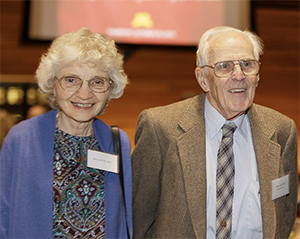 "Mike encouraged me to run my first Land o' Lakes marathon in Minneapolis. I've enjoyed running ever since, and have completed nine marathons and many triathlons. I have fond memories of Mike Daly and know that he was a family man and family physician of great integrity. I celebrate his life and the impact he had on my life and so many others during his career."

"Dr. Michael Daly headed the program during my residency in the late 1970s. I am grateful for his insistence that our dictations be done by the end of the workday and typed by the next morning.

"One summer afternoon, I had a visit from an amateur softball player who complained of dirt in his eye from sliding into a base a day prior. My fluorescein stain was negative for corneal abrasions, and no obvious foreign body was noted. I irrigated his eye, gave him saline eye drops, and recommended NSAIDs for pain.

"The following evening, he called back requesting stronger pain meds. Because the resident on call had my notes available, he requested the patient come in for a recheck. The patient showed up the next day with an infected eye and poor vision.

"I immediately called ophthalmology and went with the patient to their fifth floor office. An ultrasound revealed a shard of glass within his eye. The patient's story changed at that point: He had received the injury after the game when he threw a beer bottle into a garbage can. A tiny shard penetrated his orbit, leaving a puncture less than 1mm. The patient ultimately suffered a permanent loss of color vision in the eye.

"The fact that my initial notes were dictated, typed, and signed the next morning resulted in no action on the part of the patient: a saving grace for me."

Dr. Daly's son Mike Daly generously shares the following account of growing up with his father, co-written by himself and his siblings. The following was prepared and submitted by Mike, Mark, Maura, Matt, and Mary:

"Having grown up with Dr. Mike Daly as 'Dad,' our understanding of medicine is different from that of other people. When he was in private practice in Vermont, we knew it was vaccination time, not because of a line of people waiting but because a large Styrofoam box came home so we could play with the dry ice in the bathtub—an amazing toy when you are five or six years old.

"We saw emergency rooms, clinics, and other behind-the-scenes areas when we stopped by with Dad to pick something up in his office or to wait while he finished with his last patients. Our friends would go off to the ER for cuts, breaks, sniffles, and worse, but in our world, the ER came to us. We were stitched back together at the kitchen table or at the hockey rink. The classic black medical bag was always packed in the corner of the car as we headed off on a family camping trip somewhere between Alaska, Florida, California, or the Maritime Provinces. There were visits to the ER for broken bones, of course, as there was no X-ray machine or plaster kit in the house.

"Starting as a general practitioner in a small Vermont town provided fodder for hours of storytelling to our dad. We suspect that sometimes he was paid in chickens, venison, or some other favored Vermont currency. Thirty-four years after he left Vermont, his children and grandchildren were greeted with excitement in the deli with, 'Dr. Daly's kids are here!'

"After we moved so Dad could take a position at the Geisinger Medical Center emergency room in Danville, PA, he took great pride in helping to design a new, expanded ER there. In 1973, he accepted an invitation to help start a new family practice program at the University of Minnesota, where he spent his final 23 years in medical practice. Deep down, he was still that small town doctor who took care of whatever needed to be done.

"In his later years, he fondly remembered the many babies he and residents delivered, the many residents he had helped train, and the number of physicians who had chosen to work in rural medicine following their completion of their residency.

"Teaching and mentoring people in the practice of medicine was a profession with very practical application that carries on with others in the community, including a friend of the Daly family who is teaching the next generations an enduring life lesson from Dr. Daly: 'If it hurts when you do that, stop doing that!'"

The Department will forever be grateful for the many years of Dr. Daly's service, and deep condolences go out to his family, friends, and former colleagues.