How Smiley's Clinic is Improving Health Outcomes for Somali Patients

In one of the brightly painted hallways in Smiley’s clinic hangs a cheerful bulletin board peppered with flyers and infographics. Cabida Shiishadu waxay faafin kartaa cudurrada, reads one of the posters: Hookah can spread diseases. Ramadan Mubarak, reads another: Have a blessed Ramadan. 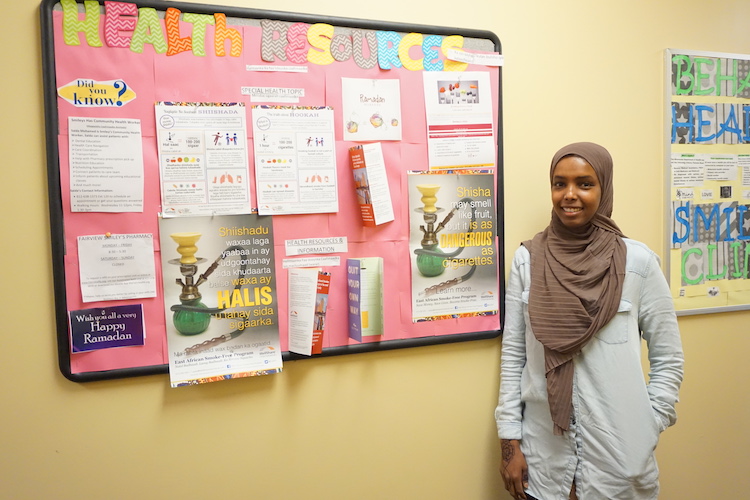 The board is one of the ways that community health worker Saida Mohamed, LSW, connects to the Somali patient population. Hired in 2016 under a United Way grant awarded to Smiley’s and Wellshare International, Saida is working to improve health outcomes in the Somali community. By helping patients navigate the often complex journey through the health care system, she is breaking down the barriers that contribute to poor health outcomes and empowering patients to become more active in their care.

Adherence to recommended screenings and preventative care has historically been low in the Somali community in Minnesota. Language and cultural barriers often hinder communication between providers and patients, and trust is not always easy to establish between immigrant populations and health care providers. At Smiley’s, where nearly 40% of office visits are with Somali patients, the addition of a culturally bilingual community health worker has had a powerful impact on improving the health literacy and outcomes of families in the community.

“We needed someone to not only help translate our system, but to be able to understand and integrate a Somali perspective,” says Pita Adam, MD, Smiley’s program director and Vice Chair for Clinical Affairs at the Department of Family Medicine and Community Health. With additional support from Smiley’s social worker Peggy Chun, MSW, and Wellshare International program manager Ashley Mitchell, MPH, Saida has been a central part of this work.

One of the most meaningful outcomes of the grant has been the recognition that deep listening is a fundamental aspect of delivering culturally appropriate care. “When they asked me why these patients are not participating in health screenings, I said we have to hear the answer from them,” says Saida. “Yes, I know their culture and their language, but this is personal.”

Focus groups with patients revealed an enthusiasm for community-based education, which inspired the clinic to launch a series of workshops on everything from managing diabetes and hypertension to healthy eating (a course which culminates in a trip to the farmer’s market to obtain ingredients for at-home cooking). Faculty, residents, and outside experts both teach the courses and learn more about the needs and cultural preferences of Somali patients in order to better serve them in the clinic. The implementation of cultural competency trainings for staff also helped the team at Smiley’s better understand the perspective of their patients. “When you’re a provider and you really understand someone, their background and history, you are better able to work with them,” says Saida. These trainings go hand-in-hand with the educational workshops, where patients learn to understand their doctors. “Patients who understand why doctors are asking them to do certain things are going to have better care relationships and more effective appointments.”

“When you’re a provider and you really understand someone, their background and history, you are better able to work with them.”

Now in the final year of the grant activities, Saida’s role as community health worker has become a mainstay at Smiley’s. Kind and diligent, she is often the first person at the clinic that patients call when they have concerns or questions about their care - or about things in their life that affect their health. When Saida asked a diabetic woman whose sugar levels were high what was contributing to her poor health, she learned that the woman had been bullied by her landlord. Saida helped the patient write a letter to her building’s management company, and the situation was resolved - and shortly after, her health improved as well. 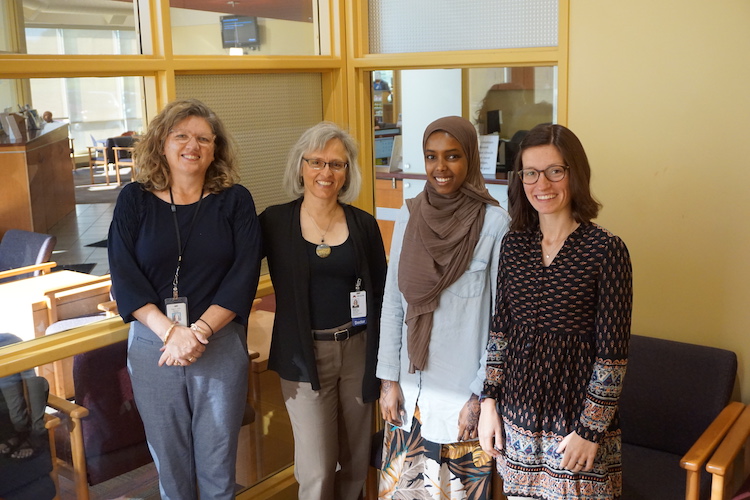 While surveys and other data are still being analyzed, there is anecdotal evidence to show that the grant’s efforts have been successful. When a measles outbreak started in Minneapolis in 2017, Saida personally called 113 families who were due for MMR vaccinations and spoke to them about the need for vaccinating their children while listening to their concerns. Most days she was successful in getting them to come in to the clinic, because, “they were talking to someone from the same culture, someone who understands their community struggles and needs,” she says. It was this same connection that allowed Saida to convince a hospitalized patient with breast cancer to accept hospice care after refusing it each time it was suggested by her primary doctors. That woman died peacefully after a few months of palliative care in the comfort of her own home.

This is one of the stories that has prompted Dr. Adam to adopt the term “cultural humility,” rather than “cultural competence.” “We thought we knew how to take care of our Somali patients,” she says. “But not until we hired a culturally bilingual community health worker were we able to understand what patients need and implement solutions that came from them.”

Hopeful for continued funding after the United Way grant period is over in 2019, the Smiley’s team is looking ahead to more integrated efforts to embed community health in the clinic. “This work is so rewarding,” says Saida. “It’s more than being a team - the patients are like family now.”