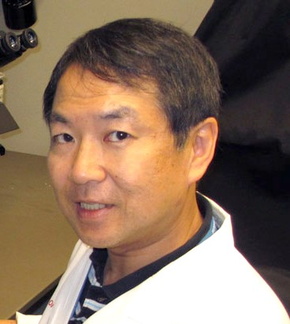 Dr. Atsushi Asakura is an Associate Professor of Neurology and a faculty member of the Stem Cell Institute in the University of Minnesota Medical School. He also belongs to Paul & Sheila Wellstone Muscular Dystrophy Center in the Medical School. Education: Dr. Asakura received his Ph.D. at the Institute of Medical Science at the University of Tokyo Graduate School and the National Institute of Neuroscience in Tokyo with Dr. Yo-ichi Nabeshima where he learned the molecular biology of skeletal muscle differentiation. He trained at the post-doctoral level at the Fred Hutchinson Cancer Research Center in Seattle with Dr. Stephen J. Tapscott. His post-doctoral studies involved the transcription factors for skeletal muscle development during early embryogenesis. He trained at the senior post-doctoral level at McMaster University in Hamilton and the Ottawa Health Research Institute in Ottawa with Dr. Michael A. Rudnicki where he started projects on skeletal muscle stem cells that contribute to muscle regeneration.

Over the past 30 years, Dr. Asakura has studied the myogenic transcription factors and muscle stem cells with an emphasis on Duchenne muscular dystrophy (DMD) therapy. Since he was a graduate student and postdoctoral fellow in the laboratories of Drs. Yoichi Nabeshima, Stephen Tapscott and Michael Rudnicki, he has focused on MyoD gene regulation and muscle stem cells more than 60 peer-reviewed publications. His laboratory's goals include attempting to understand the molecular mechanisms controlling muscle satellite cell (muscle stem cell) self-renewal and differentiation, and to develop novel therapeutic methods for DMD. This also involves the stem cell niche associated with vasculature in normal and regenerating skeletal muscle. And, he has recently begun exploration of cell-based therapy with induced Pluripotent Stem Cells (iPSCs) toward muscular dystrophy model animals.

Vascular niche for satellite cell self-renewal, muscle regeneration and muscular dystrophy therapy:
For an effective form of therapy of DMD, both the muscle and the vasculature need to be addressed. To reveal the developmental relationship between DMD and vasculature, Dr. Asakura created mdx mice, an animal model for DMD, carrying Flt1 mutation with increased vasculature (Hum Mol Genet, 2010). Using the animal models, his study is the first showing that developmentally and pharmacologically increasing vascular density can rescue the dystrophic phenotype in DMD model mice (PLoS Genet, 2019). This approach might be also effective to treat Facioscapulohumeral muscular dystrophy (FSHD) (J Clin invest, 2020. These data suggest that increasing the vasculature in DMD may ameliorate the histological and functional phenotypes associated with this disease. A patent for this technology has been granted in 2018 (US Patent, 2018). In addition, he established a tissue clearing protocol for skeletal muscle. Using this protocol, he is the first to image murine whole skeletal muscle using confocal and two-photon microscopy (Methods Mol Biol, 2016), and demonstrate that satellite cells pattern the microvasculature to be in close proximity to them via VEGFA, keeps the satellite cells in a more quiescent state via Notch pathway, suggesting a beneficial cross-talk (Cell Stem Cell, 2018).

Circadian transcriptional regulation in muscle stemcells:
Dr. Asakura has dedicated much of his professional career to studying MyoD function during myogenesis and muscle regeneration, and he has published more than 30 original research articles related to MyoD since he was a graduate student. His first contributions to science as an independent investigator were to demonstrate: 1)that MyoD negatively regulates satellite cell self-renewal (PNAS, 2007) via a MyoD-mediated induction of apoptosis through microRNA-mediated Pax3 gene suppression (J Cell Biol, 2010): 2) that the CDK inhibitor p57 plays essential roles in muscle differentiation as a MyoD downstream gene(Elife, 2018): 3) that myogenesis is regulated by an isomerase activity of Fkbp5 (Cell Rep, 2018): 4) that the core circadian regulator Cry2 and Per2 which regulates MyoD and IGF2 expression promotes myoblast proliferation and subsequent myocytefusion to form myotubes in a circadian manner (Cell Rep, 2018; bioRxiv, 2020).Therefore, his hypothesis is that genetic modification of transplanted stem cells using a modification of MyoD cascade may be utilized to effectively treat DMD and improve musclefunction.

DMD therapy via induced Pluripotent Stem Cells(iPSCs):
Dr. Asakura also demonstrates that upon being infected with a retroviral vector expressing the four reprogramming factors, the satellite cell-derived myoblasts successfully gave rise to iPSC colonies. To the best of their knowledge, this study is the first showing that fully committed myogenic cells can be reprogrammed to iPSCs (Stem Cells. 2011). His hypothesis is that myoblast-derived iPSCs may maintain epigenetic memory of myogenic status, which might contribute to the higher myogenic differentiation potential. Recently, he established the blastocyst complementation to generate iPSC-derived skeletal muscle in chimeric animals (World Patent Application, 2016). A key to the generation of human myogenic cells and skeletal muscle in a host animal is the selective knockout of genes in the blastocyst that are critical for organ development. These concerted approaches will help us to create iPSC-derived myogenic cells in vivo, which can be transplanted into patients for a definitive cure of DMD. In addition, the generation of iPSC-derived DMD skeletal muscle in mice will serve as an animal model to study the characteristics and regeneration of the human skeletal muscle diseases and responses to pharmacological agents such as exon-skipping.