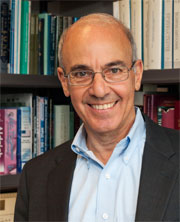 Dr. Hecht’s laboratory is focused on understanding the ways tobacco smoke constituents cause cancer. To do this he and his colleagues study the mechanisms by which these compounds enter the human body, are metabolized, and ultimately bind to DNA, causing mutations that result in cancer. Cigarette smoke contains more than 70 carcinogens. Hecht focuses on several including tobacco-specific nitrosamines, polycyclic aromatic hydrocarbons (PAH), and certain volatiles such as formaldehyde, acetaldehyde, and acrolein that are formed during the combustion process.

Hecht’s research team has developed methods to analyze human urine for these compounds and their metabolites. These methods, which employ mass spectrometry as a key analytic technology, enable his laboratory to take part in studies of thousands of smokers. Hecht’s group also uses mass spectrometry methods to analyze the DNA damage caused by the carcinogens at the level of stereochemistry, which shows the relative spatial arrangement of atoms and molecules.

The goal of Hecht’s research is two-fold: First, to provide evidence in support of ongoing regulation of tobacco products due to their harm to human health, and second, to find ways to identify the susceptible smoker. That smoking causes lung cancer is well established, but it is not yet possible to identify which smokers are most likely to contract lung cancer, which would allow for early intervention. Collaboration between research groups in the fields of genetics, biochemistry, psychology and other fields will be needed to turn promising leads of an individual smoker’s susceptibility to lung cancer into a preventive strategy.

Hecht has a long-standing collaboration with a University colleague in psychiatry who is studying the mechanisms of addiction. Given that more than a billion people of the world’s population of seven billion people are smokers, including an estimated 45 million in the U.S. and 300 million in China, the impact of learning the biological and psychological mechanisms involved in tobacco smoke addiction is a major public health challenge and opportunity. Understanding these mechanisms also can lead to the identification of smoking prevention strategies and potential chemopreventive agents.