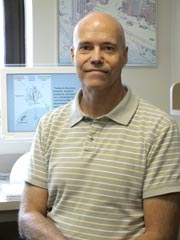 My laboratory contributed to the seminal study showing that cytochrome c (Cyt c) translocates from mitochondria to the cytoplasm during apoptosis and plays a key role in the activation of programmed cell death (Cell 86:147-157, 1996). Later we and others found that Cyt c is released from apoptotic cells as an intact protein (Cell Death Differ. 9:538-548, 2002). Cyt c is being considered clinically as a biomarker for aberrant apoptosis as occurs, for example, in patients who may develop encephalopathy following influenza virus infection.

While developing an immunoassay to detect Cyt c in serum we discovered that leucine-rich alpha-2-glycoprotein-1 (LRG) binds Cyt c and inhibits its detection in an antibody-based assay (Apoptosis11:1121-1129, 2006). LRG has been implicated as a serum biomarker for cancer and microbial infections and a urinary biomarker for juvenile appendicitis. However, its function is unknown. We have shown that LRG binds Cyt c in a manner similar to that of the protein Apaf-1 that initiates the intrinsic pathway of apoptosis. In vitro, serum LRG acts as a survival protein extending the half -life of lymphocytes, rather than acting as a pro-apoptotic protein (Apoptosis 15:139-152, 2010). We are continuing to investigate the mechanism behind the survival function of serum LRG. We have also developed an enzyme-linked immunosorbent assay for LRG that may be useful clinically (J. Immunol. Methods 336:22-29, 2008).

In related studies, we have collaborated with Dr. Janet Dubinsky, Department of Neuroscience to understand the mechanisms of Cyt c release from mitochondria using the rat brain as a model (Antioxid. Redox Signal. 7:1158-1172, 2005). There are at least two different mechanisms that appear to be involved. In response to certain types of stress Cyt c is released without damage to the mitochondrial outer membrane and in response to high calcium levels, as occurs during stroke, the mitochondrial matrix swells causing lysis of the outer membrane. Therefore, we propose that both mechanisms should be targeted to lessen the consequences of stroke and neurological disorders.