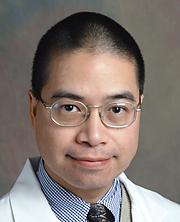 Dr. Lam joined the university in 1998. He is a versatile neurosurgeon who works in several areas, including pediatrics, functional neurosurgery, and spine. Most of his time is spent at the Minneapolis Veteran’s Administration Hospital where he works with patients and runs the VA-funded Neuro-transport Lab. “I’m interested in the movement of substances in and out of the brain,” he said.

Having received his PhD from the University of Minnesota's Department of Biomedical Engineering in the area of fluid transport, Dr. Lam likens this type of fluid movement to building a dam or to draining sewage. “For instance, hydrocephalus is a buildup of water in the head,” he noted. “We want to know how that water can be removed.”

Dr. Lam’s research at the VA focuses on removing by-products of trauma from the brain such as debris, blood by-products, or dead tissue. “Military trauma motivates the VA’s interest in this work,” he noted.

To do his research, Dr. Lam works closely with other departments at the U, such as Mechanical Engineering. In addition to partnering with Dr. Walter Low of the Neurosurgery Department, Dr. Lam is currently working with Allison Hubel, Mechanical Engineering; Ching Yuan, Ophthalmology and Neurosciences, and Greg Vercelloti, Hematology and Oncology. Together, they are designing instruments that will allow them to quantify fluid movement – or substance kinetics – in a single cell. “When you isolate a cell, you reduce or remove any influences on fluid movement,” he said. “Then you can observe that movement from one side of the cell to another.”

Why is this important? According to Dr. Lam, if you have a blood clot in the brain it contains toxins and oxidants that should be removed before they can do any damage. Dr. Lam and his research associates want to figure out how to help the body do that. “Any sort of toxins, drugs, or poisons can be studied by the same paradigms that we use,” he added. “Our research is rather broad.”