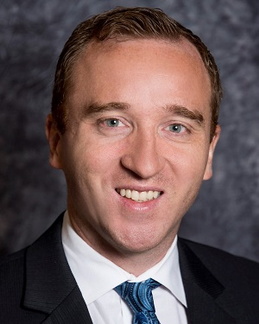 A native of Rhode Island, Dr. McGovern received his MD from Columbia University College of Physicians and Surgeons in New York City and his undergraduate degree (with honors) in neuroscience from Trinity College in Hartford, CT. Following medical school, he completed his neurosurgical residency at Columbia University Medical Center/New York-Presbyterian Hospital in New York, NY, and a year-long fellowship in epilepsy surgery at Cleveland Clinic in Ohio.

Dr. McGovern is a functional/stereotactical neurosurgeon who specializes in treating patients with epilepsy and in providing deep brain stimulation surgery for relieving symptoms in patients with movement disorders such as Parkinson’s disease and essential tremor. He is splitting his time between the university (two days) and Minneapolis Veterans Affairs Medical Center (three days).

Between college and medical school, Dr. McGovern spent two years working in a lab in Boston, MA. “It was an incredibly productive lab, but I discovered it wasn’t what I wanted to do with my life,” he said. “I wanted something more patient-centered.”

Neurosurgery attracted Dr. McGovern because, “I felt like I could have the most immediate impact on patients through the specialty,” he said. “I would always be at the cutting edge as we keep learning new things and applying them to whatever disease we’re interested in.”

He believes there are three important aspects to practicing neurosurgery in an academic setting: patient care, teaching and research. “When it comes to patient care, I try to be as honest and transparent as I can about what goes into a surgery,” he explained. “It’s a journey you take together with your patient, so no one is surprised on either end.”

From a teaching standpoint, Dr. McGovern believes that, “educating patients, residents and medical students is one of the most important things we do in an academic practice. What’s especially nice at the VA is that there is only one resident for each six-month rotation, which gives you an opportunity to develop an intimate relationship. It’s a great way to teach.”

Dr. McGovern and his family live in the Edina/Richfield, MN, area. When he has spare time, he likes to play with his son, find new restaurants to eat at with his wife, stay active and hopes to run in the Twin Cities marathon in October. He also is a passionate sports fan who loves all sports, but particularly baseball and his “beloved” Red Sox.

Dr. McGovern hopes to set up a lab to study refractory (untreatable) gait and balance problems in patients with Parkinson’s disease. “I did some work in this area when I was a resident at Columbia University,” he said. "Working with Parkinson’s patients who have DBS systems, we now have the technology to record brain signals as patients perform certain tasks. I’m interested in trying to figure out which brain signals are important in this context and how they might be related to gait and balance issues.”

On the clinical side, Dr. McGovern wants to determine why there aren’t more epilepsy surgery referrals. “It was amazing how many epilepsy patients I saw in Cleveland who initiated the visit themselves or accidentally ended up with us,” he explained. “They were so clearly good surgical candidates. It’s seems to be acceptable for a patient to have seizures. If someone sees a brain tumor on an MRI, most people feel it needs to be urgently removed. Because it seems like a chronic condition, epilepsy is seen as something patients must simply live with. But if you help someone become seizure-free, it changes their lives. They can get off disability, they can get a job, they can drive. It’s such a massive thing for people. I’m interested in figuring out how to overcome existing biases against referring patients for this potentially life-changing surgery.”