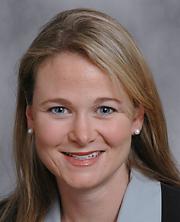 Residency in Obstetrics and Gynecology, University of Minnesota Medical Center, 2002

Currently Dr. Geller is an Associate Professor in the Department of Obstetrics, Gynecology and Women’s Health, Division of Gynecologic Oncology at the University of Minnesota. Dr. Geller specializes in the treatment and management of gynecologic malignancies and is committed to clinical and translational research. Dr. Geller has received independent funding for her projects and has published in peer-reviewed journals as well as presented her research at scientific meetings.

Dr. Geller is currently the University of Minnesota PI of multiple clinical trials run through the NRG, a national cooperative group, and the University of Minnesota Women’s Cancer Center. She is the primary investigator on multiple clinical trials involving the use of natural killer (NK) cell immunotherapy for women with recurrent ovarian cancer. Her translational research is funded by the American Cancer Society (ACS) and involves the investigation of immunotherapies in an ovarian cancer mouse model. She currently holds a Department of Defense grant funding the creation of an interactive mobile phone application to educate women with ovarian cancer on the importance of genetic counseling for hereditary cancers.

Dr. Melissa Geller is the Director of Research for the Division of Gynecologic Oncology.

Dr. Geller received an institutional K12 scholar award in 2008 which allowed her to focus on research addressing new therapies to treat women with recurrent ovarian cancer. A significant part of her effort is concentrated on trying to understand how to exploit NK cells for therapeutic purposes against ovarian cancer. To this end, she has led multiple clinical trials involving immunotherapy in advanced gynecologic malignancies. Dr. Geller holds an American Cancer Society (ACS) Clinical Scholar Award for her translational research investigating a next-generation immunotherapy product by expressing an anti-mesothelin chimeric antigen receptor (CAR) in human induced pluripotent stem cells (iPSCs) to generate targeted NK cells with increased ability to kill human ovarian cancer cells. Additionally she has developed and assessed technology based interventions to improve the quality of life for women with ovarian cancer. Dr. Geller is currently funded through a U.S. Department of Defense award to create and test a mobile App for Genetic Information on Cancer (mAGIC) aimed to educate ovarian cancer patients about genetic counseling and testing. Dr. Geller serves as the Director of Research in the Division of Gynecologic Oncology and leads the Translational Working Group of the Masonic Cancer Center on Gynecologic cancers. She currently serves on the NRG Oncology Developmental Therapeutics/Phase I/Experimental Medicine Committee.

Dr Geller was interviewed by WCCO on the High Difficulty of Diagnosing Ovarian Cancer. See the full interview here