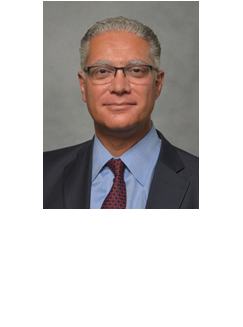 Dr. Maalouli is a native of Beirut, Lebanon who graduated from McGill University in Montreal, Canada with a bachelor's degree in Neurobiology. He went on to study medicine at the American University of Beirut then completed his pediatric residency at the Mount Sinai – St. Lukes Medical Center in Manhattan, New York.

Post residency, he practiced pediatric primary care in Illinois and New York then joined PACE Pediatrics in St. Paul, Minnesota in 2000 where he established one of the first electronic medical records system for primary care practices in the Twin Cities and introduced the first automated prescription dispensing system in Minnesota in private practice.

In 2008, he took on the responsibility of establishing the pediatric hospitalist program at Children's of Minnesota and successfully led it until 2012. He pioneered the use of scribes in the inpatient setting and developed a hospitalist run food allergy testing program in close cooperation with community allergists. Subsequently, he assumed the role of Chief Medical Officer at La Rabida Children's Hospital in Chicago, Illinois in 2012. During his tenure there, he actively led multiple quality and safety improvement initiatives, expanded the hospital referral network and re-organized the medical staff leadership and review process.

Dr. Maalouli rejoined his family back in Minnesota in 2014 and resumed his work in pediatric hospital medicine at the Mayo Clinic Health System before finally embarking on an academic career at the University of Minnesota as an Assistant Professor of Pediatrics and pediatric hospitalist in 2016 where he is currently engaging in clinical research and teaching. He remains active in systems improvement as a member of the University of Minnesota Physicians Compliance and Risk Management committee and the Fairview Ridges Hospital Quality Improvement committee.

Neural networks in the clinical diagnostic and management setting; Condition based predictive algorithms for clinical risk

Pediatrics, American Board of Pediatrics