I traveled to Stockholm, Sweden as a third year medical student and took a class titled Medical Development in Europe. The trip and class was a great experience, and one I would recommend for students wishing to learn about healthcare in Sweden, Lithuania, and Italy.

First, and most importantly, I met with two Swedish students who were currently studying at the University of Minnesota. It was so valuable to talk with Swedes about applying to Karolinska, and being a student in Sweden. Then, we were able to stay in touch as I prepared for my trip. And when I was in Sweden, we were able to get together. Throughout the experience, it was of great importance to have a couple of contacts that I could rely on to ask important questions. 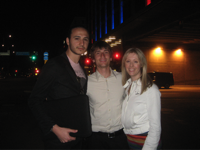 I met Hillevi, right, and her boyfriend (Marco on the left) while in Minneapolis. We met several times in Stockholm, and she was a great friend while there.

Next, it takes a good deal of initial planning to block out time to take an away rotation at the Karolinska Instituet. I applied one year before leaving for the rotation. This required rearranging my schedule with a range sufficient to meet Karolinska's dates, as well as plan some extra travel time while abroad. I also read through a few other students journal entries about their trip to Sweden, which proved to be very helpful. I would recommend going through a few as most were accurate.

Additionally, if traveling to Sweden in May, it is important to remember that it is still cold there since their latitude is the same as Juneau, AL. Additionally, this means that in May their days are already 18 hours, and by early June the sun was coming up at 2:15AM. So, packing for Sweden, I had to make sure I had a range of warm clothes and spring clothes. In terms or hospital attire, all hospital staff must wear white scrubs, so it is not important to pack hospital wear. 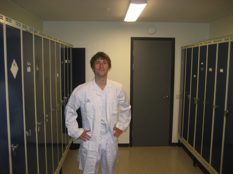 Picture of me in white scrubs, the typical hospital attire.

No student from the University of Minnesota had taken Medical Development in Europe before me. The class was advertised a policy course that aimed to show how different countries combat similar diseases, mainly cardiovascular disease.

The class was four weeks long. In the first week, only students from outside of Italy, Sweden, and Lithuania took the course. Therefore, only three people including myself were there. In that week we learned primarily about healthcare in Sweden and other Baltic countries. We were flooded with statistics, graphs, and charts. However, I was fortunate to have personal discussions with the faculty.

In the second week of the course, the rest of the 30 students joined us. This included 15 Swedes, 5 Italians, and 5 Lithuanians. The class then focused on healthcare in Sweden, as well as a great discussion about the medical education process in respective countries, which proved to be quite interesting.

The next week we traveled to Kaunas, Lithuania where the class focused on primary health care issues in Lithuania, which were very different from Sweden. For instance, Lithuania actually has the highest rate of suicide in the world. We also had a chance to tour the anatomy museum and get a historical lesson about the development of medicine since the fall of the USSR.

During the third week, we also went to Brussels where the European Union housed us and gave us a two day informational session about what the EU does for European healthcare. I learned a ton of information about how the governments and nations must work closer together to provide universal care no matter where citizenship in Europe lies. 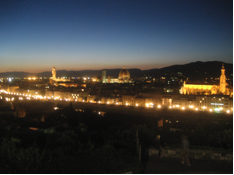 Nighttime viewing of Florence, a class favorite after classes while in Italy.

The final week of the class took place in Florence, Italy. There we participated in similar class activities with a special focus on Italian aspects of care. It was surprising to learn how much healthcare quality varies in the different regions of Italy. Additionally, patients in the hospital are asked to take their own temperatures every morning.

The class ended with a group presentation after experiencing healthcare in all three countries. Each group had a different disease in which we were required to do further research, and analyze statistics from European databases. Then, based on what we had experienced, discuss how each country is combating that particular disease.

In each country, we were able to shadow physicians, primarily in the hospital, and see the patients first hand. Of course language was a barrier, especially in Lithuania and Italy, but the doctors always offered English explanations. These shadowing experiences were part of the class curriculum and allowed us to get a first hand experience with health care in each country. Additionally, each country gave sufficient time to take in the culture. This included group trips to museums and city areas, as well as a restaurant dinner taken care of fully by the course. In total, the class was provided 7-8 meals throughout the four weeks.

Perhaps most importantly though, I was surprised to learn that the medicine practiced in each country is practically identical to that of the United States. The practice guidelines, the imaging offered to patients, and laboratory measurements were exactly the same as those in the United States. As much as I expected there to be great differences between European medicine, and the medicine within the three countries; I was surprised to see how similar the actual medicine of it all was.

Meeting medical students from other countries was the highlight of the class. I learned a lot more about medicine in my casual discussions with classmates than I did during any of the lectures. Which is not to say anything against the lectures, but getting to meet and discuss first hand experiences was the most stimulating and insightful aspect of the class. Most student's English was very good, it was almost hard to tell for many Swedes which language was actually their first language. Swedes start learning English at the age of 6.

Typical view from Sodermalm, the island in which I lived.

It is hard to even start to discuss what to do during free time. Stockholm is a wonderful city with many things to do. Most activities within a 35mile radius are accessible by train, subway, or bus, so the city lends itself quite well to foreign students. In terms of museums, Skansen and Wasa museum were interesting, but don't go alone as the museums get somewhat boring quickly. I did however also enjoy the Nordiska museum. Additionally, Swedish food is really not that popular in Sweden, and when available it tends to be more expensive as most Swedish food is served to tourists. The food is more expensive than food in Minnesota, unless you eat fast food often. Stockholm is also 33% public park, so I spent plenty of time running and walking on their trails. Stockholm is also a city of 13-15 islands, so water is plentiful and makes for some beautiful landscapes. It is almost difficult to get bored while in Stockholm. While you are in the other countries you will travel all over the cities with classmates, which means most of your experiences will just be going with the flow.

Of note, I think it is very important to analyze my own costs. I received the scholarship from the U to pay for the plane ticket, my dormitory, and additional spending money. Karolinska gave a scholarship to all students of $280 for travel between countries. After adding up all expenses, I figured I spent about $600-700 out of pocket to off set travel, museums, food, and one additional travel week in Stockholm. I was very pleased with that!

I really enjoyed my trip to Sweden. I learned a lot, and was finally happy to get a chance to see what socialized medicine is all about. What I learned in Sweden may not have greatly improved my medical knowledge, but I gained a great cultural awareness, and first-hand experiences that many classmates do not have the opportunity to witness. I consider myself fortunate to be friends with many people across the Atlantic Ocean. I hope I can utilize my experience in one way or another to be a better doctor in the future.