Dr. Carol Lange (left) stands with Dr. Julie Ostrander in their laboratory to discuss the latest finding in their research. (Photo taken January 2020)

Carol Lange, PhD, a professor in the University of Minnesota Medical School’s Departments of Medicine (Division of Hematology, Oncology and Transplantation) and Pharmacology, has spent the majority of her career analyzing the biological mechanisms behind breast cancer. Now, a significant grant from METAvivor worth $500,000 over three years will allow Dr. Lange, her collaborator, Carol Sartorius, PhD, from the University of Colorado, and their colleagues to better understand how steroid hormone receptors impact the disease.

In particular, estrogen receptors (ER) and closely-related progesterone receptors (PRs) play a crucial role. Both ER and PR proteins are abundant in breast and reproductive tissues and are required for normal health and development, but they also influence breast cancer cell survival, dissemination and metastasis. Following hormone stimulation, these receptors enter the cell and are retained in the nucleus, where they interact with DNA to either express or repress genes that promote normal cell processes.

The actions of ER and PR, and thus their gene targets, are altered in breast cancer. Typically, the overwhelming majority of breast cancer research is focused on ER. But, Dr. Lange’s grant will focus on PR — specifically, the studies will address how ER and PR interact with each other to drive breast cancer metastasis in patients whose tumors harbor a mutant-activated form of ER. The team has recently discovered that ER/PR-containing protein complexes regulate genes that are important for cancer metabolism, a change that allows cancer cells to survive in harsh conditions as they travel throughout the body.

“What we need to target is cancer metabolism in addition to proliferation. I’m really excited about the direction we’re going with this. When ER and PR are in the same cancer cells, they most often work together, so we have to change our thinking on how we study these hormones and all of their complexity. We can’t focus on just one pathway (i.e. ER), so now we’ve opened it up to study how these steroid hormone receptors compete as well as cooperate in different cancer contexts,” said Dr. Lange, who will be conducting her research as a member of the U of M Masonic Cancer Center. 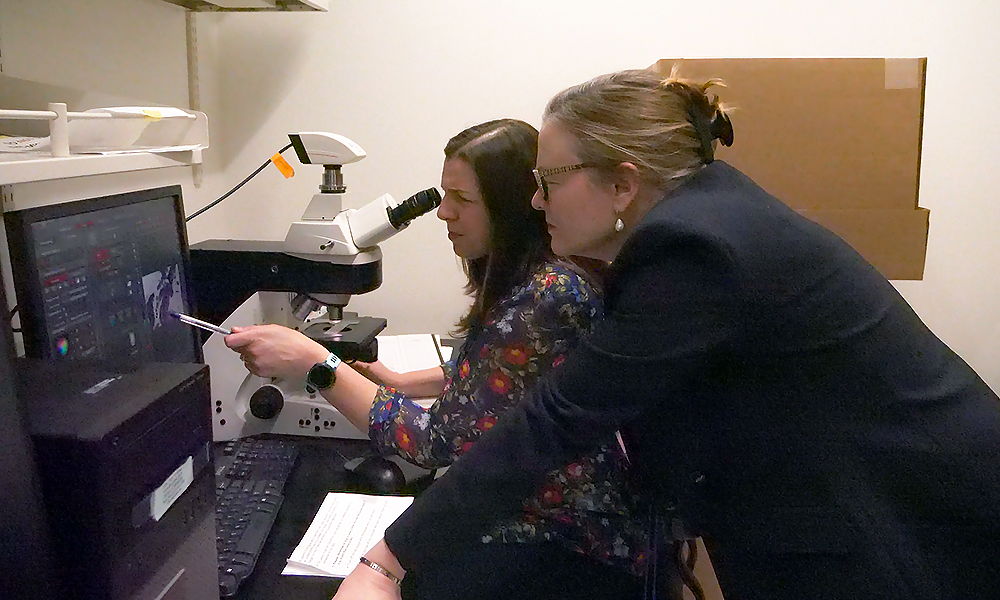 The ESR1 gene that encodes the estrogen receptor is associated with resistance to endocrine therapy, a common long-term treatment for women with breast cancer. In addition, metastatic ESR1-mutant breast cancers express high levels of PR that are always chemically modified by phosphorylation. Dr. Lange’s study hypothesizes that phosphorylated PRs “feed” metastatic ER+ breast cancers, allowing them to maintain metabolic flexibility and to regenerate and maintain a therapy-resistant state.

“In a context where ER is mutated, the first thing it does is turn on PR and the associated genes. We think that the crosstalk between the two might be different from the checks and balances present during normal hormone-regulated processes. In highly aggressive cancers, we want to analyze the mechanisms of that crosstalk. We suspect that ER needs its PR partner. ER is driving proliferation while PR is driving endocrine resistance and ‘stemness,’ a property that enables the seeding of new tumors from a single cell. Right now, clinical treatments for luminal breast cancer are primarily based on targeting ER. More recently, combination therapies include drugs that inhibit a signaling protein known as CDK4/6,” Dr. Lange said.

A complete understanding of the significance of steroid hormone receptor cooperation between activated ER and PRs, as well as their interactions with abnormal and elevated cell signaling pathways, is urgently needed to improve upon existing treatment strategies for metastatic breast cancer. Dr. Lange hopes to increase the scope of current research and use the knowledge gained to inform future treatments and establish biomarkers for women who may be at a predisposition for certain processes to occur, such as endocrine resistance and metastasis.

“We’re looking at protein complexes on DNA and trying to understand what we can target to get around endocrine resistance because just targeting ER isn’t working, and we need to target other parts of the same protein complexes. These receptors can either inhibit each other or activate each other in different contexts and we really need the full picture,” Dr. Lange said.

The objective of study is to uncover how PRs, when phosphorylated, can support, maintain and renew the metastatic cascade in ER+ breast cancer. The research will attempt to answer many questions. When ER is mutated, how does that change PR activity and subsequent outcomes? What are the details of the transcription process on the DNA? How are ER+/PR+ breast cancer cells becoming resistant? If you have a mutation in ER, then which drugs that block PR or other proteins, including signaling molecules, in the ER/PR complex would be most effective?

Dr. Lange will be using public data on breast cancer genomics and examining actual samples of breast cancer tissues in the laboratory, as well as testing new drug combinations in preclinical mouse models of breast cancer known as patient-derived xenografts. In the future, she hopes this research will be the bedrock for a clinical trial that validates the scientific findings.