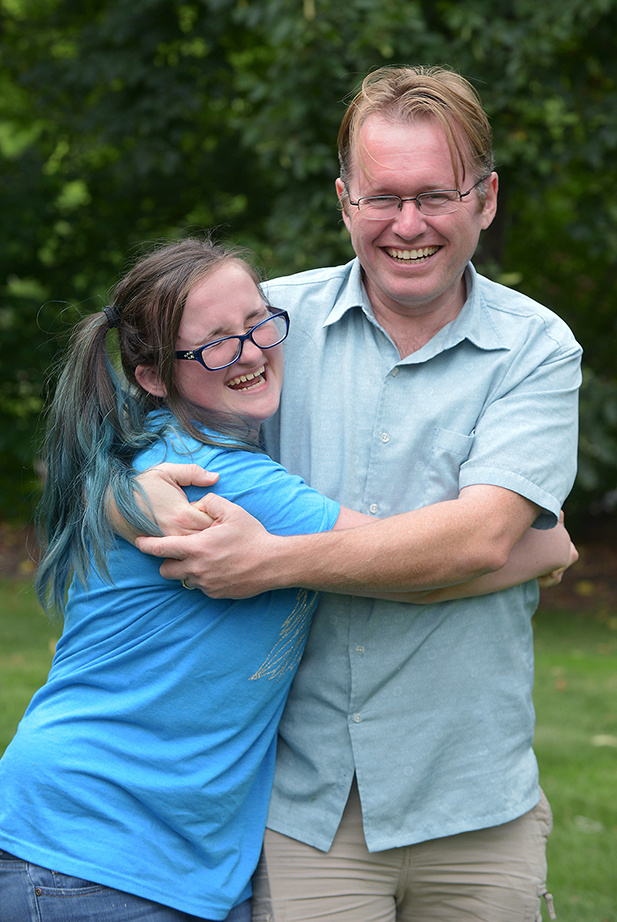 “Pancreas on the move!”

In that moment, nearly 6:30 a.m. the morning of February 10, 2018, time seemed to stand still in the operating room of the University of Minnesota Masonic Children’s Hospital – except for the surgeon carrying the pancreas to the 12-year-old girl lying on the operating table.

Everyone in the room knew that what they were about to embark on was no small feat. Emmy Reeve’s transplant would be the youngest pediatric pancreas transplant that doctors in the United States had performed in nearly 25 years.

“It’s not about our success, it’s about success for Emmy and having a better life,” said Raja Kandaswamy, MD, Transplant Surgeon and Professor, General and Transplant Surgery in the Department of Surgery with the University of Minnesota Medical School, “and we were willing to take a risk in order to do that. We also had the expertise needed to do it, which is only available in an academic medical center such as ours."

Emmy was diagnosed with type 1 diabetes when she was 4 years old. Type 1 diabetes is a disease where the immune system destroys the beta cells of the islets that make insulin, therefore kids with the disease typically need insulin injections. Shortly after Emmy’s first injection, her parents noticed an unusual and pretty intense reaction including difficulty breathing and a rash.

The more her disease progressed, the more she needed insulin, and the worse her reactions got. It was determined she was essentially allergic to the very thing that was supposed to keep her alive.

“The medication we have to use to treat this disease is insulin, it’s not like type 2 diabetes where we can give her a pill, she needs insulin, literally, to stay alive,” explained Melena Bellin, MD, M Health Pediatric Endocrinologist and Associate Professor in the Department of Pediatrics, University of Minnesota Medical School.

For a time, Emmy’s doctors in South Carolina were able to control the allergic reactions with antihistamines and pain medication.

“They have to keep her on quite a few medications for her to really get by, but she still has pain where her insulin is infusing, she has episodes of getting a rash, itchiness, and she’s on a number of medications to treat the side effects she has with insulin,” explained Bellin.

Emmy’s complications grew worse. Her eyes and her nerves were damaged by her type 1 diabetes. The number of antihistamines and pain medication she required also took a toll on her quality of life. The secondary complications threatened Emmy’s longevity.

“Her parents have taken her to the best medical centers in the country to try and correct the problem- nothing has worked,” said Kandaswamy.

But he had a plan.

A ray of hope

“Dr. Kandaswamy looked at everything, looked at her and said- she needs a transplant. He was the first person to come up with a way forward,” said Tiffanie.

The Reeves knew a pancreas transplant was not a “cure-all” for Emmy. A new and healthy pancreas would enable her to start producing natural insulin—effectively ending Emmy’s diabetes—but the procedure came with its own risks and side effects.

“Only a handful of people in the world have been found to have these types of reactions. As a medical professional, you look for other alternatives short of a pancreas transplant, but this is a particularly difficult condition to treat,” said Bellin.

Kandaswamy and other University of Minnesota Health and Medical School experts agreed a whole-pancreas transplant offered Emmy the best chance.

Emmy and her parents were confident in the team surrounding their daughter. “It’s a great team which is made up of a whole bunch of doctors she sees up to 4 times a week,” explained Tiffanie. “All they want is what’s best for Emmy. Even in her care plan, they have to ‘take her to the zoo once a week’, because they know how much animals mean to her. I wasn’t expecting that.”

Pancreas transplants are more common among adult patients, but in children, the procedure is extremely rare. And that is why Emmy’s procedure would be the first of its kind at any hospital nationwide in nearly two decades. 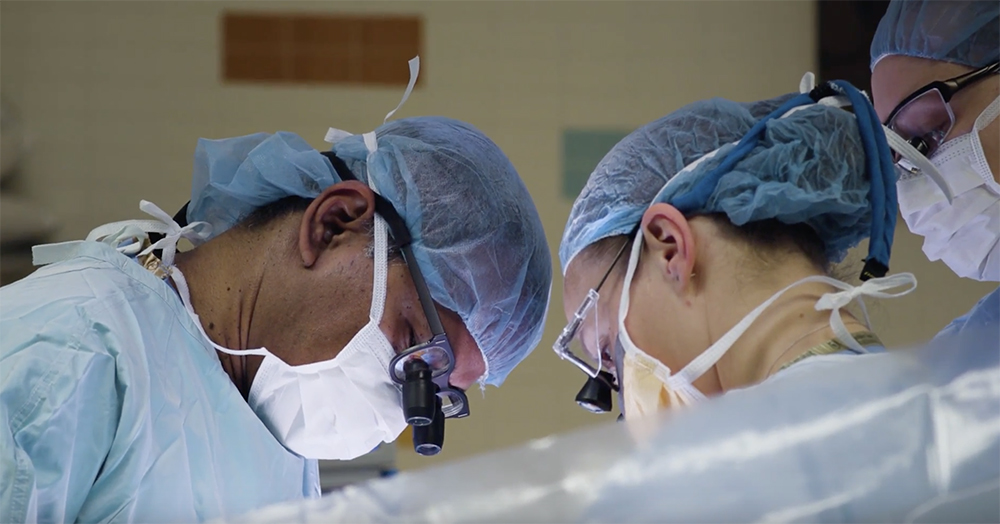 The promise of “what could be”

In July 2017, Emmy was placed on the transplant list. She and her mom moved to the Ronald McDonald House in Minneapolis so they could be closer to University of Minnesota Masonic Children’s Hospital for treatment. Jack stayed behind in South Carolina to care for Emmy’s younger sister.

As summer turned to fall and fall turned to winter, the promise of “what could be” kept the family positive.

“Can you imagine what she’ll be able to do when she’s not tired all the time and in pain? I mean she’s probably going to rule the world with all she wants to do! It will be great to see,” said Tiffanie, smiling ear to ear.

Meanwhile, her care team was using every precious moment to prepare for the surgery, and care needed for events after. “Right after surgery, coordination of care will be most important. We need to be very clear on communication, with both the family and the entire care team,” said Bellin.

And although there was urgency for the surgery, they did not want to rush something so important.

“The first offer may not be the one we accept, in fact, she has received a couple of offers but none of those matched the criteria we have set forth for her to get a successful transplant,” explained Dr. Kandaswamy.

Tiffanie got the call on February 9th, when Emmy was watching a documentary about wolves. Based on her love of animals, it seemed like a sign.

By 2 am, they were walking into Masonic Children’s, being greeted by Dr. Kandaswamy himself, who would be performing the surgery.

The surgery lasted four hours and was a success.

“Once the surgery is done, sometimes you feel it. And I felt it in this one. I had a good feeling about it, and it turned out to be true,” said Kandaswamy. 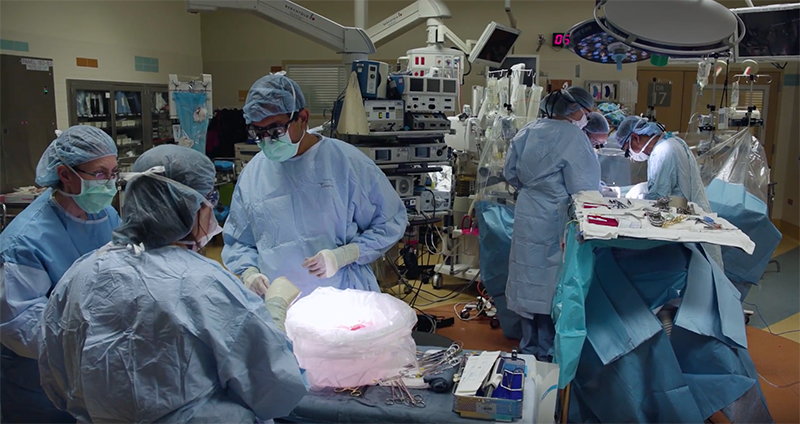 After the surgery, Emmy’s healthy pancreas took over and began producing insulin for her body. Emmy, currently 13 years old, is now insulin independent, which means she no longer needs insulin injections—or the medication to counter the allergic reactions she experienced after each injection.

And she is no longer in pain. “She’s into art, and she’s sculpting! In fact, she made a nice little clay sculpture for me for Easter! This is fantastic!”

Although the team is extremely satisfied with the results, their work is not entirely over.

“During the first year of transplant our antennas are still up, we are watching Emmy very closely and while we are very proud and happy about having achieved this success for Emmy we still feel like we are living it because we want to get her through a sustained period.” Said Kandaswamy. “We will never just sit back and say oh, we did it.”

Dr. Kandaswamy hopes this procedure opens doors and opportunities for others like Emmy in the near future.

“I hope people keep in mind that when you have extremely difficult to treat diabetes, with seemingly no options left, transplant is an option. Even though it is not the first thing that comes to mind, and people should perhaps the application of transplantation in children, specifically pancreas transplantation, has been underutilized,” said Kandaswamy.