Hitting the Hardwood for Cancer Research

The road to the NCAA® Men’s Basketball Championship ended in Minneapolis this year. Excitement surrounding the commencement of the festivities was palpable on Friday, April 5th as thousands of fans filed in the U.S. Bank Stadium to cheer on their team. But, regardless if they had come to support Auburn, Michigan State, Texas Tech, or Virginia, everyone cheered together in support of the players that took to the floor for the INFINITI Hardwood Heroes Basketball Game benefitting Coaches vs Cancer. For the first time in its four-year history of playing this game in an effort to raise cancer awareness, and also draw attention to the need for philanthropic support of cancer research, physicians and care providers joined cancer patients and cancer survivors on the court. 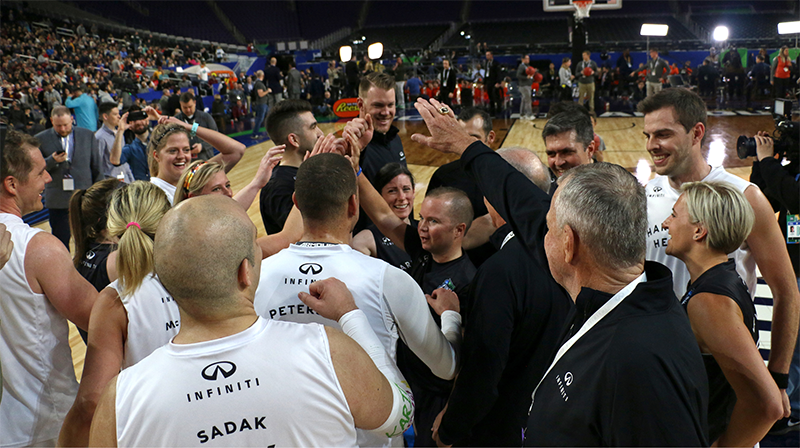 Time to Play while on the Road to Recovery

“It’s a little overwhelming, but exciting,” stated Jonathan Benson during warm-ups for the Hardwood Heroes basketball game. Benson, a brain cancer patient, was selected to play for team coached by the former NCAA® University of Wisconsin–Madison Badgers Men's Basketball head coach, Bo Ryan. Benson described his journey through diagnosis, treatment, and now, recovery that lead to this once in a lifetime experience.

On July 1st, 2016, Benson was in a car accident, caused by a seizure that left him unable to control his vehicle. Imaging revealed what everyone had feared, cancer. Following neurosurgery to remove the mass, Benson was diagnosed with a high-grade primary brain tumor.

Now, three years later, after completing radiation and chemotherapy, he is off cancer-directed treatment and healthy to be playing on the same court as the NCAA® Men’s Basketball Final Four alongside other fellow cancer patients and survivors. The team also includes oncology medical staff and caregivers, including one physician that is very familiar to him- his University of Minnesota Health neuro-oncologist Elizabeth Neil, MD.

“There was a point I was told there was nothing they could do. But I didn’t accept that,” remembered Benson. He sought the opinion of Neil and that is where their road to recovery began.

“I am so grateful for all of her help and guidance,” said Benson. 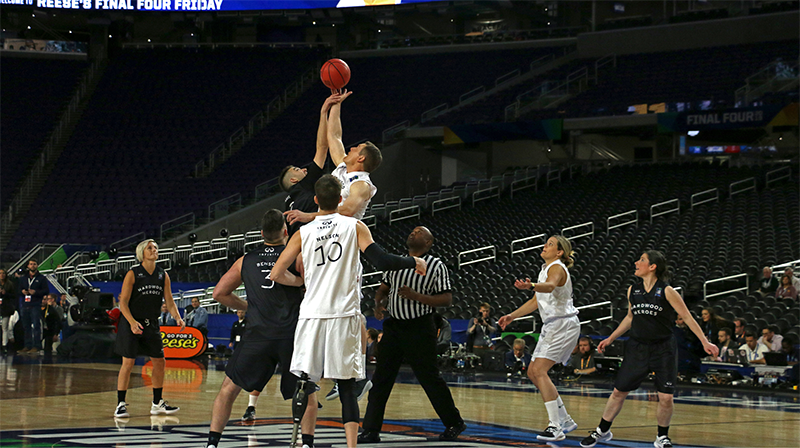 Teamwork On and Off the Court

Basketball is not foreign to Neil, having received a full-ride Division I college basketball scholarship. “Growing up, I dedicated a lot of time to become a good basketball player. I not only learned how to hone my game skills, but also developed a deep appreciation for teamwork and commitment as well as came to understand the benefits of having a strong personal drive,’ said Neil. “These attributes have helped me become the physician that I am today.”

The Hardwood Heroes event was an opportunity Neil could not pass up. It was a chance for her to raise awareness for something that drives her professional career- fighting cancer- by doing something she deeply enjoys - playing basketball.

Neil is an Assistant Professor in the Department of Neurology at the University of Minnesota Medical School, a board-certified neuro-oncologist, and a member of the Masonic Cancer Center. She knows the importance of research first hand, and says that it is through philanthropy and organizations like the American Cancer Society (ACS), which supports Coaches vs Cancer, that makes her research endeavors possible.

ACS currently funds $8.5 million dollars of cancer research at intuitions across Minnesota, including the University of Minnesota.

“We have been seeing an increased survivorship over the last few years,” said Jennifer Baumgartner, the Executive Director for Minnesota, North Dakota and South Dakota at the American Cancer Society. “So, seeing people playing on the court is a great example of what people are now able to do, thanks to great research and care.”

According to the American Cancer Society, one in two men and one in three women will receive a cancer diagnosis in their lifetime. “In Minnesota alone, more than 30,000 of our friends, family members and colleagues will hear the words ‘you have cancer,’ this year,” said Baumgartner. About 10,000 Minnesotans are expected to lose their lives, just this year, to cancer. 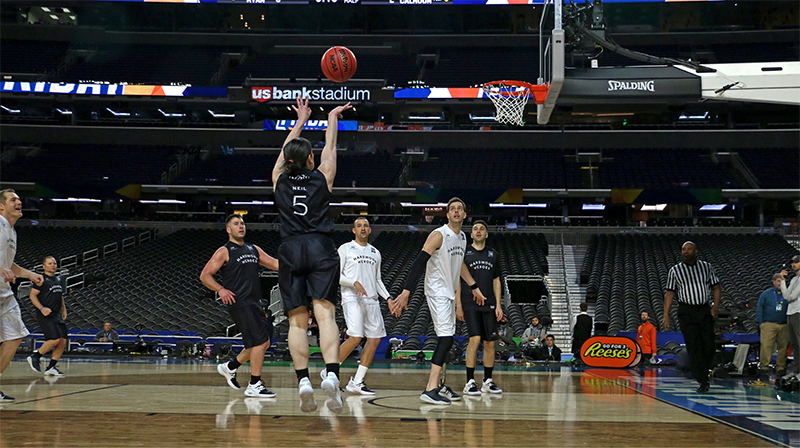 A Game for a Great Cause

"This is personal for us. We've all been touched by cancer in one way or another. For us to contribute towards a cure is important," said Phil O’Connor, director, INFINITI Marketing Communications and Media, at a luncheon for the players after the game.

At the luncheon, INFINITI also presented the American Cancer Society with a check for $1 million for cancer research. 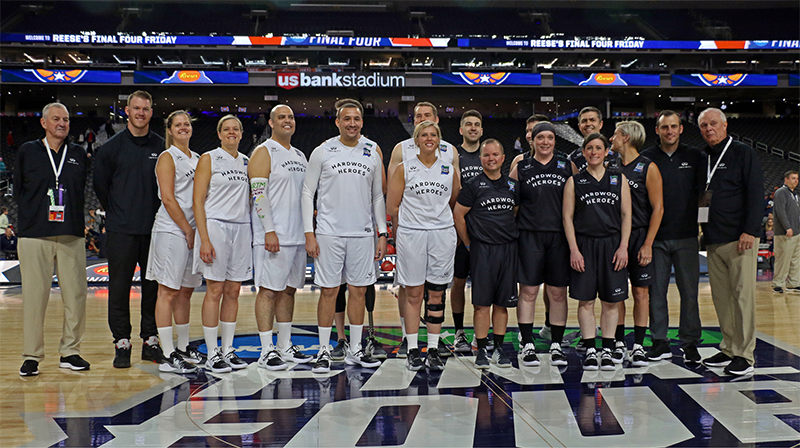 The game came down to the final seconds, as the team coached by Calhoun won by one point. Even though they had been divided into two teams, all the participants remain united in their fight against cancer and for the betterment of their patients. To Neil, “events like this keep everyone enthusiastically motivated to achieve our goal of finding a cure for brain tumors”.

Highlights from the practices and the game were aired during the Bridge Show between the two semifinal games on Saturday, April 6, and during the pre-game show prior to tip-off on Championship Monday on CBS.