Fourteen-year-old Emmy Reeves has always had a passion for art. From her animal drawings, to her realistic sketches of animals, to the murals on her bedroom wall, Emmy’s talent is very apparent and far-reaching. But her latest piece of work goes even deeper. 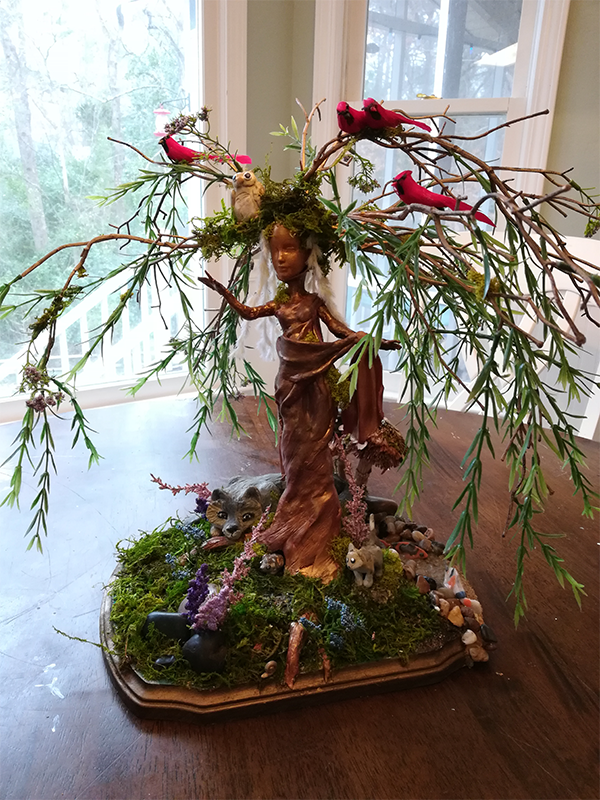 Called "Gaia's Aegis," Emmy’s sculpture represents Gaia's- or the Goddess of the Earth’s- influence and protection throughout her life and for those who have become a part of it. Gaia is depicted as a tree, with animals resting at her roots, representing each person who has touched Emmy’s life along her journey. Gaia is the protector, shield, and guide. The cardinals in Gaia’s branched are Emmy’s friends who have passed away and never made it home, and her great-grandparents.

“My inspiration for the piece came from my faith in the mother earth and the experiences I had while awaiting a pancreas transplant last year,” said Emmy.

On February 10, 2018, Emmy became the youngest person in the United States to undergo a pediatric pancreas transplant of its kind in nearly 25 years at University of Minnesota Masonic Children’s Hospital. Now, a year later, she and her hospital care team celebrate a year after transplant, and what that milestone means.

A long journey
Emmy was diagnosed with type 1 diabetes when she was 4 years old. Type 1 diabetes is a disease where the immune system destroys the beta cells of the islets that make insulin, therefore kids with the disease typically need insulin injections. But Emmy, it was discovered, was essentially allergic to the very thing that was supposed to keep her alive. She was given a strict regime of painkillers and antihistamines to control her allergic reactions. But as her complications grew worse, her parents turned to a different solution- a pancreas transplant. A new and healthy pancreas would enable her to start producing natural insulin—effectively ending Emmy’s diabetes.

“It's one thing to get the transplant done which hadn’t been done for about 25 years in someone as young as Emmy, but what’s more is to keep that pancreas functioning for her significant life,” said Raja Kandaswamy, MD, Transplant Surgeon and Professor, Department of Surgery, University of Minnesota Medical School. “We have not had a one year pancreas survival in a pediatric recipient in as far as I can remember.”

Dr. Kandaswamy led the multi-disciplinary team that performed Emmy's transplant. He says that Emmy stands out as someone whose case was not only initially successful, but has had sustained success and he attributes that to the strong team and legacy at the University of Minnesota Medical School.

“I think the entire team should feel proud of the pancreas and islet programs which are world class and have taken it upon themselves to really help patients in need, patients that have been turned down in other institutions,” said  Kandaswamy, “and I think a life changing story such as Emmy’s really reinforces that inspiration we feel towards patients who are not served by mainstream medicine.” 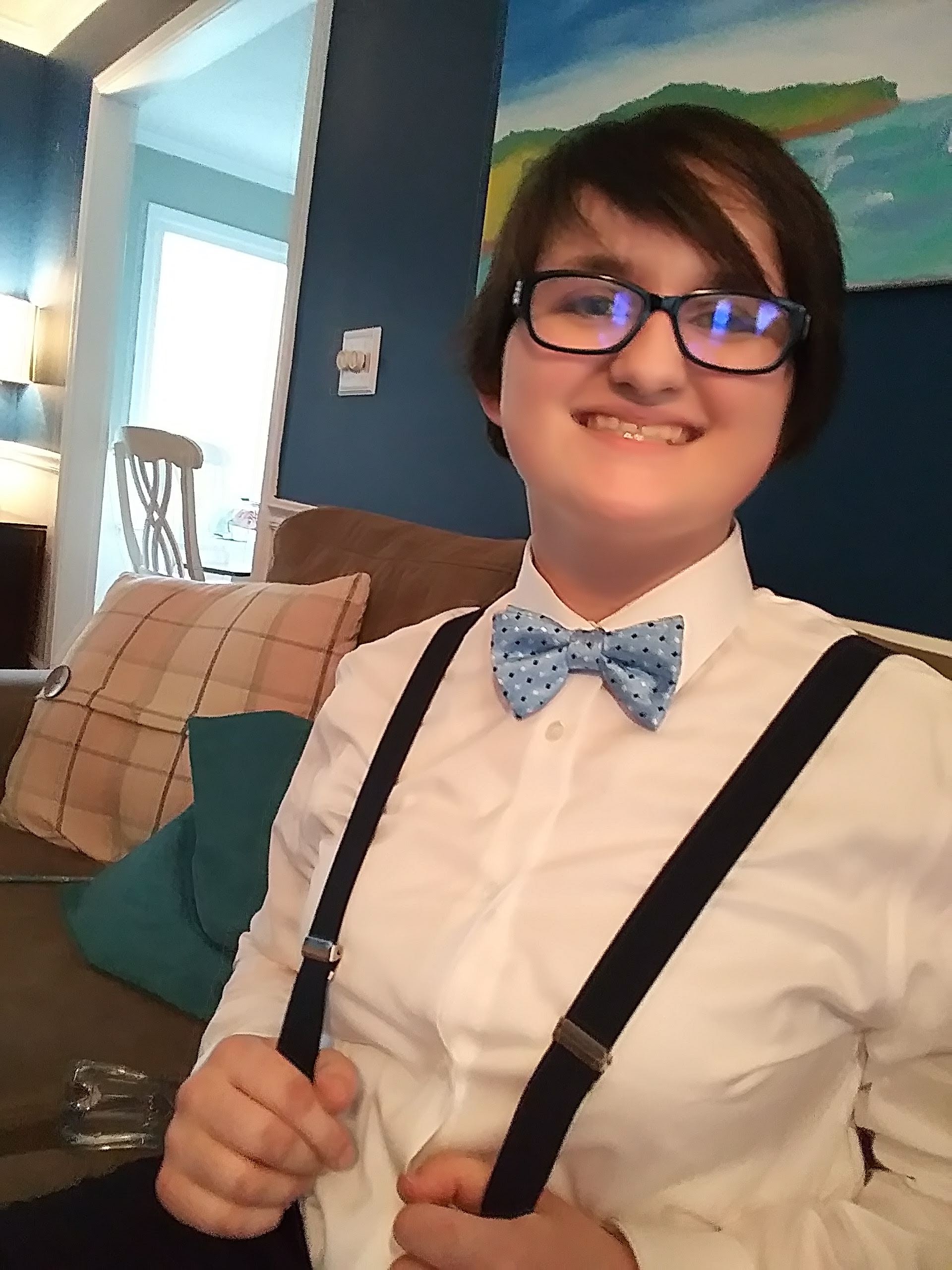 “Waking would happen with a start,” remembers Tiffanie, pretransplant. “Is she breathing? Did I over sleep? What’s her Blood sugars? Is she reacting?”

Life now is very different for the Reeves family. Emmy typically wakes up before they her parents, the energy of a teenager finally able to course through her veins now that she longer needs to take multiple doses of antihistamines.

Emmy can also eat what she wants now. As she told KARE 11 during a recent interview she has now discovered donuts, and loves them, especially apple fritters.

“I like to stay busy,” Emmy said. “I like to go on walks with my dog, Newt, which are more me dragging him around. I’m in the church choir, I like to work on my art projects- I am working on a graphic novel.”

“She finally gets to be a kid; she gets to live,” said Tiffanie.

Open to new possibilities
When Emmy last saw her M Health pediatric endocrinologist Melena Belin, MD, associate professor, Department of Pediatrics, University of Minnesota Medical School, she was no longer using insulin and had come off her medications.

“It’s wonderful,” said Belin. “Emmy's diabetes is treated and she is longer diabetic, and will remain so as long as her pancreas is functioning, which could be a long time.”

Dr. Bellin points out that the decision for transplant was to enhance Emmy’s quality of life. “Most kids with diabetes have a good quality of life on insulin but Emmy was different. She didn’t because she had a struggle with pain from insulin reaction, and rashes and side effects from the medications.”

But now, Dr. Bellin has seen a change. She has seen Emmy blossom. During her visits, Emmy is often drawing or creating something, showing her medical team her artistic side. Emmy has certainly opened up since her surgery, now sharing her story as well.

Emmy says she wants to share her story with others so that they might have the opportunity to have their lives changed like she did. “I feel good. I hope to open the possibility of transplant to more kids.”

Drs. Kandaswamy and Bellin say while this type of surgery may not be a solution for everyone, Emmy’s journey has taught them a lot.

“Patients may not be aware that pancreas transplantation is even an option,” said Kandaswamy. “Hopefully this will lead to people asking about the procedure and to transplants being performed in children in the small subset in whom the current nonsurgical therapy does not meet the needs.”

“I wish other parents could experience this,” said Tiffanie. “This wouldn't have happened if we hadn't done this transplant. Honesty, I don't know how much longer her body would have lasted. To say we are so grateful to our entire medical team and the University of Minnesota, is an understatement.”