Medical schools across the nation time their Match Day events, so every student in the country gets the life-changing news simultaneously. For Andy Samborski and Alex Erickson, the news within their envelopes will come to them as a couple.

When we first started dating, we knew that if we liked each other enough and if it was going to be long-term, we both had to do well because couples matching would be coming down the road. Our ultimate goal was to make sure we could stay together after medical school.—Andy Samborski

“The hard part is you make your rank list together and trying to figure out that order and balance is difficult,” said Alex, “We’re really fortunate that we have a good chunk of schools that we both really liked and would be happy at.”

Luckily for Andy and Alex, they have been navigating medical school and their relationship since nearly the beginning of their time at the University of Minnesota Medical School.

“Andy actually grew up with my cousins and lived just down the street from them. They even had cabins up north, literally a mile apart from each other. Before medical school started, my aunt told me about Andy and how nice he was. I basically just blew it off, but then we had a small group together the first year, and that’s when we put it together. Now my aunt likes to credit for that,” said Alex.

“For us, medical school has always been our dream. We took things really slow, kind of just hanging out and being friends for a while before actually going on a date. We weren’t officially dating until the second semester of our first year,” said Andy.

“After we started dating, we stopped studying together and sitting next to each other in class. We support each other, and we understand what each other is going through, but we also wanted to separate the stress of medical school and our relationship. Choosing to separate home life from school early on has worked well for us,” said Andy.

Alex has chosen to match into Obstetrics and Gynecology (OBGYN), a path she did not always think she would take.

“I actually thought I was 100% going to be a pediatrician when I entered medical school. So I vividly remember thinking it was so great that I didn’t have to stress about what specialty I was going into like everyone else, but then Andy did his OBGYN rotation first and told me I was going to love it. After hearing that, I moved my OBGYN rotation up and just fell in love with it," said Alex.

For Andy, it was more about dialing into his passion for the muscular-skeletal system. He will be matching into Orthopedics.

“I like that the patient population is typically really motivated to get better, plus their problems are fixable. Not only that but in this specialty, I’ll see big trauma injuries and get to help these people at the worst day of their lives. It fits my personality well,” said Andy.

With their specialties chosen, rank list completed, and classes wrapping up; Andy and Alex are nearing the end of their time at the University of Minnesota Medical School.

“We’re trying to manage expectations for ourselves and our families, so we haven’t shared our rank list with them. It’s going to be a big surprise for everyone, including us,” said Andy.

Match Day isn’t the only big event on the horizon for Andy and Alex.

“We do Match Day, get married, honeymoon in Hawaii, come back to graduate, and then start residency,” explained Andy. 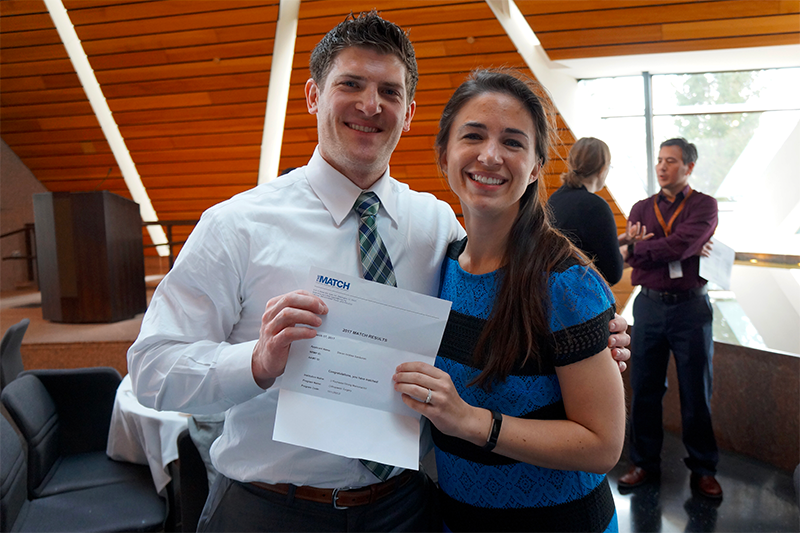 Andy and Alex will be fulfilling their residency at the University of Rochester/Strong Memorial in Rochester, New York. Tim Kummer is another fourth-year medical student who matched on March 17, 2017, learn about his non-traditional journey to Match Day 2017.