“We kind of have a choice of where we go to medical school, but with residency, it’s just up in the air. I make my list, the programs make their lists, it’s put into this magical box, and the result comes out.”

On Friday, March 17, Victoria Black Horse will be alongside her classmates as she learns just where she will be spending her residency.

“It’s a little bit nerve-racking to think about uprooting my life again, but what is different for me, probably in comparison to many of my classmates, is that I have done that multiple times throughout my education already,” Victoria explained.

There will be nerves, excitement, and undeniable energy as students from all different backgrounds share the commonality of passion for medicine and a long, hard journey to that very moment in time known as Match Day.

Victoria is originally from Issaquah, a town just outside of Seattle, Washington. She attended Willamette University in Oregon to complete her undergraduate degree before coming to the University of Minnesota Medical School.

I was drawn to Minnesota, in particular, the Duluth program, because it only has 60 students and really invests in producing family medicine doctors, primary care physicians, and being involved in Native American healthcare. I also appreciate that this program gave me the opportunity to be in Duluth initially, and then the Twin Cities, giving me ample time to explore Minnesota.—Victoria Black Horse

Victoria credits her drive and three main foundational pillars to her successful completion of medical school.

“The first pillar is my mom. She raised my sister and myself to be strong, independent women who give back to our community. The second is God and the blessings my family and I have received, and the third pillar is the community, in particular, Indian Country because it has really helped define me. I am an enrolled citizen of the Seminole Nation of Oklahoma,” said Victoria.

In her pursuit of becoming an M.D., Victoria has made it her mission always to be involved in Indian Country in some capacity.

“I have always had a mission to support Native youth. Since attending the University of Minnesota Medical School, I have been able to serve as a student mentor and instructor for the Native Americans into Medicine undergraduate program, Health Science Academy, and the pre-matriculation program through the UM Center of American Indian and Minority Health,” said Victoria.

Victoria has chosen to match into Internal Medicine.

“What I like about Internal Medicine is that it is very broad, and I embrace that because I don’t want to be narrowed down to one thing after all of this training. There’s also a lot of possibilities in career options; I can either go into primary care or sub-specialize. Right now I’m thinking the primary care route, which will probably lead me to a Native American health focus,” said Victoria.

Victoria has grown to love Minnesota and describes it as her home away from home. She would be thrilled to be matched in Minnesota or the Northwest.

When I initially came to Duluth, it was gorgeous, even in the dead of winter, and everyone was so friendly. I have found so much truth in the phrase ‘Minnesota Nice.’ Being from out of state, my classmates have been like family to me. They’ve been able to give me the support I’ve needed throughout medical school.—Victoria Black Horse.

She is looking forward to experiencing the excitement of Match Day with the people she’s been through medical school with.

“Ultimately I’m ready for whatever news I get. It will be lovely to have the closure that Match Day brings,” said Victoria. 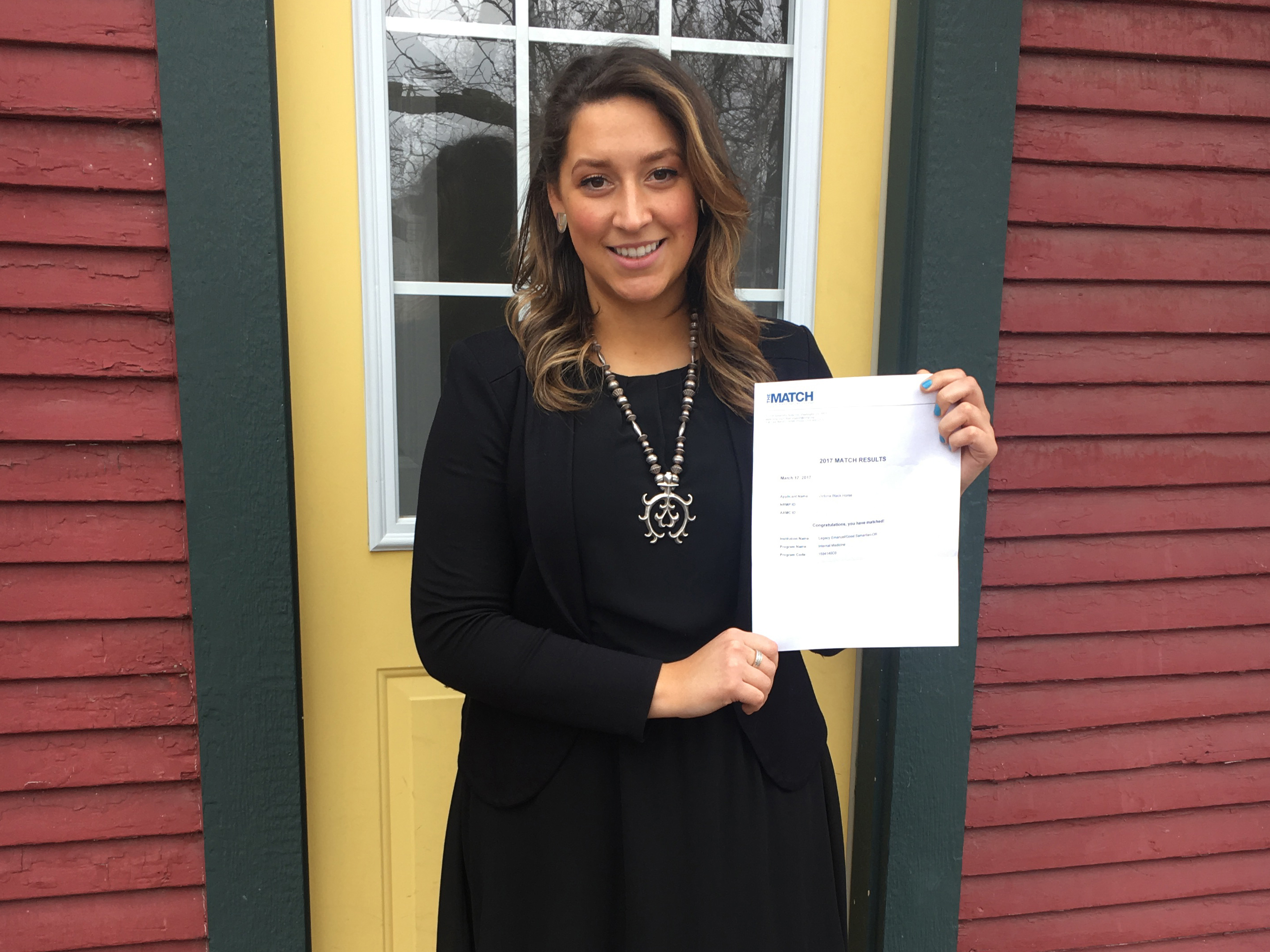 On March 17, 2017, Victoria matched into Internal Medicine and will be spending her residency at Legacy Emanuel/Good Samaritan in Portland, Oregon. She is excited for the new adventure and looking forward to connecting with friends she has in the Portland area. We also met fourth-year students, Andy Samborski and Alex Erickson who participated in Match Day as a couple. Read their story.