Every March, students gather for the medical school tradition known as Match Day, where soon-to-be graduates learn where they will spend their residency. For Medical School student, Tim Kummer, March 17, 2017, will be the culmination of a non-traditional journey.

Match Day has kind of always been this off in the distance thing that didn’t ever actually seem real. Now that it is actually getting close, I feel general anxiety. All I want is for time to pass, so I know where I will be matched and can take the next step.—Tim Kummer

Originally from Manitowoc, Wisconsin, Tim attended Marquette University in Milwaukee for his undergraduate degree. He started as an education major before spending a summer in Voi, Kenya where he lived with the Sisters of St. Joseph (nuns who were nurses). This defining experience sparked Tim’s interest in medicine and guided his choice to switch his major to nursing.

After graduation, Tim worked as an Emergency Room nurse for a year and a half in Milwaukee before moving to Tanzania to volunteer as a nurse. While there, Tim started to think about going to medical school. After his year of service, he moved to the Twin Cities and began taking prerequisite classes for medical school.

“I was working at Hennepin County Medical Center as a nurse and liked what Minneapolis had to offer in terms of diversity and the refugee population. It was probably more the community that drew me to it (medical school) more than anything else,” said Tim.

Tim joked that he somehow talked the University of Minnesota Medical School into letting him in and happily accepted the offer that allowed him to stay in the community he had grown to appreciate. Unlike most of his classmates, Tim didn’t have recent classroom experience to carry with him into the first two years of medical school.

“The transition, volume, and speed of information that you’re given in the first two years was really challenging, especially as a non-traditional student,” Tim explained, “In the first semester of the first year I was really learning how to be a husband, a dad, and taking on this kind of volume of information all at the same time. I was really juggling life and learning how to learn. Once I got into the clinical years, years three and four, my nursing experience kind of kicked in and I felt much more comfortable in that environment.”

Tim has chosen to go back to his roots and match into Emergency Medicine. The decision wasn’t made lightly, though.

I spent a number of years trying to talk myself out of Emergency Medicine because so many people, when you tell them you want to do emergency, have a visceral reaction,” Tim said, “It was until my first emergency medicine rotation in June of going into my fourth year, that I found that I just really loved it.—Tim Kummer

Tim is motivated by serving others and has a keen ability to work through challenging situations.

“The thing I love the most is that in Emergency Medicine you are constantly working with different disciplines. I feel it is the most interdisciplinary position that there is, and I really enjoy that constant teamwork, in addition, to probably the more typical things that people like about emergency: there is a lot of action, there’s no downtime, and you’re dealing with a lot of different illnesses at the same time.”

Fourth-year Medical School students will receive their envelopes and finally hear their matches on Friday, March 17 during a private reception and ceremony in the Great Hall of McNamara Alumni Center. Tim’s wife Nicole, their two daughters and newborn baby will be with him as he learns his fate.

“If we end up moving, it’s a big deal. It means my wife needs to find a new job, and I have to pull my daughters out of their school. It’s exciting because I know that if we end up moving it would be an adventure and we’re always up for one, but it’s pretty nerve-racking.” 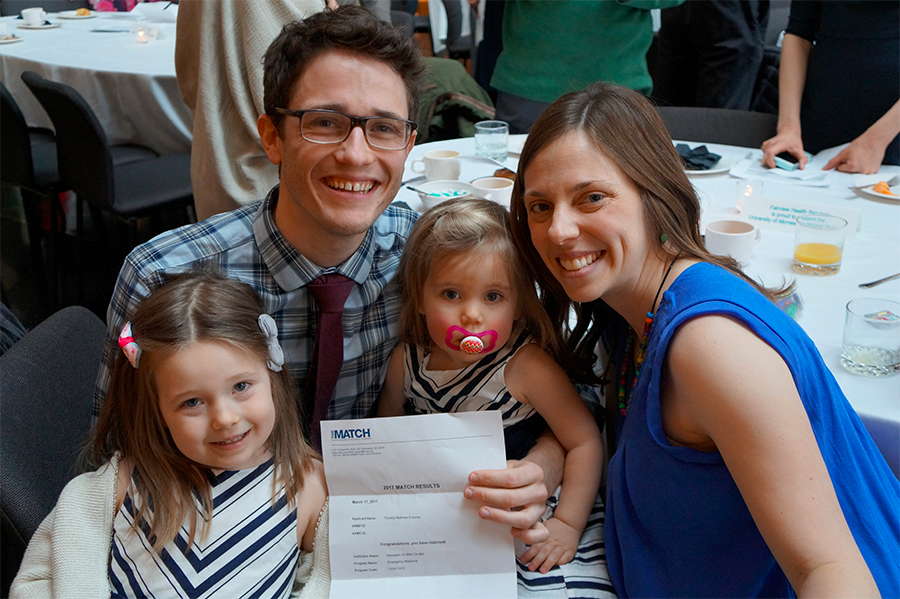 Tim was surrounded by his wife Nicole, their two daughters, and their newborn baby when he learned he will be staying in Minnesota and spending his residency at Hennepin County Medical Center. We also spoke with Victoria Black Horse, another fourth-year medical student who shared her journey to Match Day 2017. Check out her story.