“I started off in pre-med; biology, chemistry type stuff. Then, after a couple of years, I was trying to hold down two jobs, and it was too much. I ended dropping out,” says Duluth, Minnesota native Kelly McKinnon.

McKinnon continued working at a group home taking care of developmentally disabled adults for ten years before deciding to go back to school.

“I needed something a little more mentally stimulating, in addition to taking care of people,” he says.

He thought about going back to become an ultrasound tech, but the program had a long waiting list. So, he continued to work, doing better than ever in school.

“I was a little older, a little more mature, and my dream of going to medical school was all of a sudden possible again,” he says. “I decided, ‘Why not go for it?’ It’s a second chance that most people don’t really get.”

Once he found out that he was accepted to the University of Minnesota Medical School, he canceled the rest of his interviews. “There was no point. It was the perfect fit for me,” he says.

With only sixty students per class on the Duluth campus, he felt as though he had ample opportunity to connect and forge friendships with both students and professors throughout his medical school career.

“What stands out to me so much is my classmates and my teachers,” he says. “They’re great people. Everybody supports each other, and the faculty members are fantastic.”

Now, heading into Match Day, McKinnon has chosen to match into Family Medicine for the opportunities it provides to work on a broad range of health issues, including hospice, geriatrics and palliative medicine.

“I like taking care of old folks and young kids and everybody in between,” he says. “I think that family medicine kind of offers you the opportunity to have whatever kind of medical practice you want.”

As far as where he matches, McKinnon is nervous but excited to find out.

“I would say that I am 99 percent excited, and just a little scared,” says McKinnon. “I’m going to be happy wherever I end up, as long as I make it to the next step.” 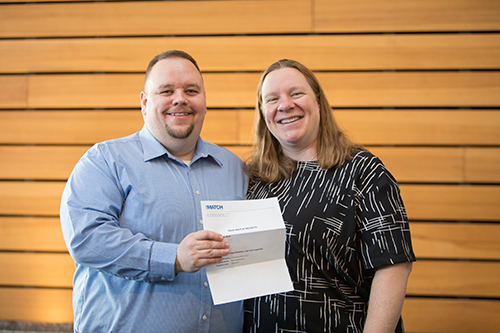 Update: On March 16, 2018, Kelly McKinnon matched with the University of Minnesota, Duluth, in Family Medicine! Learn more about Match Day 2018, find more student stories like this one, and our full list of matches at med.umn.edu/matchday2018.