Who knew extracting DNA from strawberries could be so much fun?

That’s how University of Minnesota Medical School Department of Pharmacology graduate students connected with kids and families at the Science Museum of Minnesota during the Women in Science & Engineering event, a hands-on science experience focused on female leaders in a variety of scientific and engineering professions.

At the “Strawberry Smash” station, Department of Pharmacology graduate students helped kids extract DNA from strawberries using common household products--dishwashing soap, salt and rubbing alcohol. It turns out strawberries have a lot of DNA, and using this method precipitates enough DNA for attendees to actually see and harvest it.

Hallie Hintz, fourth-year graduate student, expressed that events like this are important to keeping science accessible and teaching kids that anyone can be a scientist.

“Many of the kids had not learned about DNA at school yet so it was fun being able to introduce them to a new concept. It was also fun talking with the parents and answering more advanced questions, too,” Hallie said. “It’s a super interactive way to show kids how fun and messy science can be! A lot of kids mentioned that they had science projects or fairs coming up and wanted to use our activity--it was great to see how engaged and interested the kids were.”

Emma Wille, first year graduate student, hopes the activity helped to leave an impression on kids about the world of science. 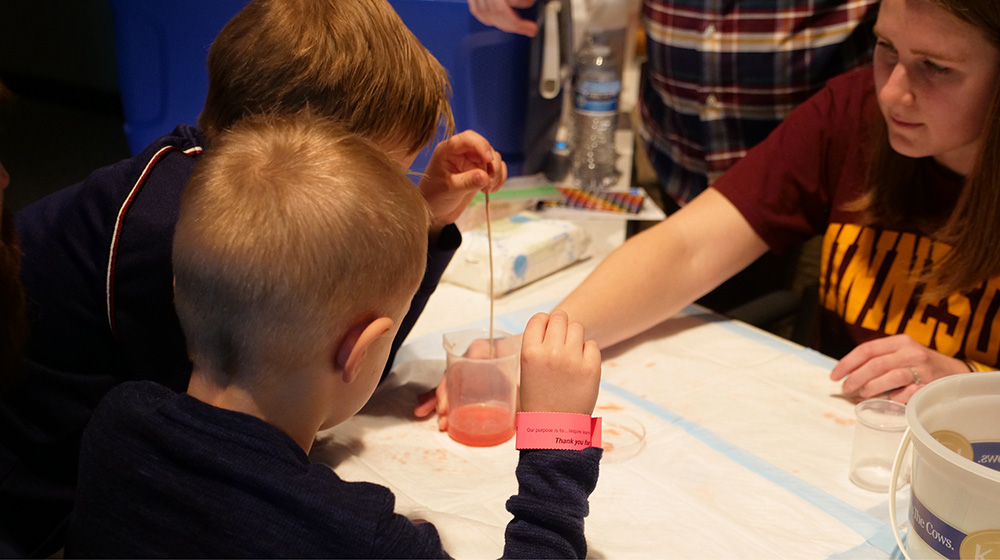 “Graduate school has been so focused on classes and research and meeting degree requirements that it was a really nice change to bring science to a community setting.” Emma said. “If we want the next generation to be scientifically-literate, critical thinkers, sparking some scientific curiosity early is vital.”

"Scientific discoveries can improve our lives--and the people who make it happen are important. That is why we want our visitors to see themselves in science,” said Laurie Fink, PhD, Chair of Science at Science Museum of Minnesota and Department of Pharmacology Graduate Program alumnus. “The U of M Pharmacology students add so much to the Women in Science & Engineering event as they show museum visitors the fun in science, serve as role models and inspire the next generation of scientists and engineers."

The “Strawberry Smash” experience was organized and hosted by the Pharmacology Graduate Student Organization (PGSO). The organization was started in 2017 to provide resources, support and a network for graduate students in the Department of Pharmacology. Hallie is currently PGSO president.

“The PGSO helps build and sustain a sense of community,” Hallie said. “Once you get placed in a lab it is easy to lose touch with other students, and those relationships are important to being engaged and successful in the program.”

The goals of the PGSO include increasing student representation in the department, interdepartmental collaboration and professional development for students. To these ends, the group has representation at department meetings and participates in curriculum and admissions  review, and hosts a variety of career development events including alumni panel discussions and networking opportunities. In addition, they support local community events and organizations, such as the Angel Foundation and The Sheridan Story.