U.S. Senator Amy Klobuchar met April 6, 2018, with University of Minnesota Medical School Alzheimer’s researchers and saw first-hand some of the latest work being done for the disease. 5.7 million Americans are currently living with Alzheimer’s Disease. By 2050, that number is expected to rise to nearly 14 million people, according to the Alzheimer’s Association, with annual costs associated with the disease estimated to exceed $1 trillion at that time.

“The U has always been on the cutting edge of Alzheimer’s research,” said Sen. Klobuchar, “I’m here to see the great work being done. It’s incredibly impressive.”

The senator met with UMN researchers, including Sylvain Lesné, PhD, an Associate Professor in the Department of Neuroscience. Lesné introduced the senator to some members of his group, including his laboratory manager, Mathew Sherman, and an undergraduate student, Damyan Hart.

“I am proud of the state-of-the-art research studies on Alzheimer’s disease conducted at the University of Minnesota,” said Lesné. “My colleagues and I studying this disease have already seen that recent funding increases have accelerated research, and it is clear that a sustained investment in the future will be essential to continuing the momentum of research discoveries.” 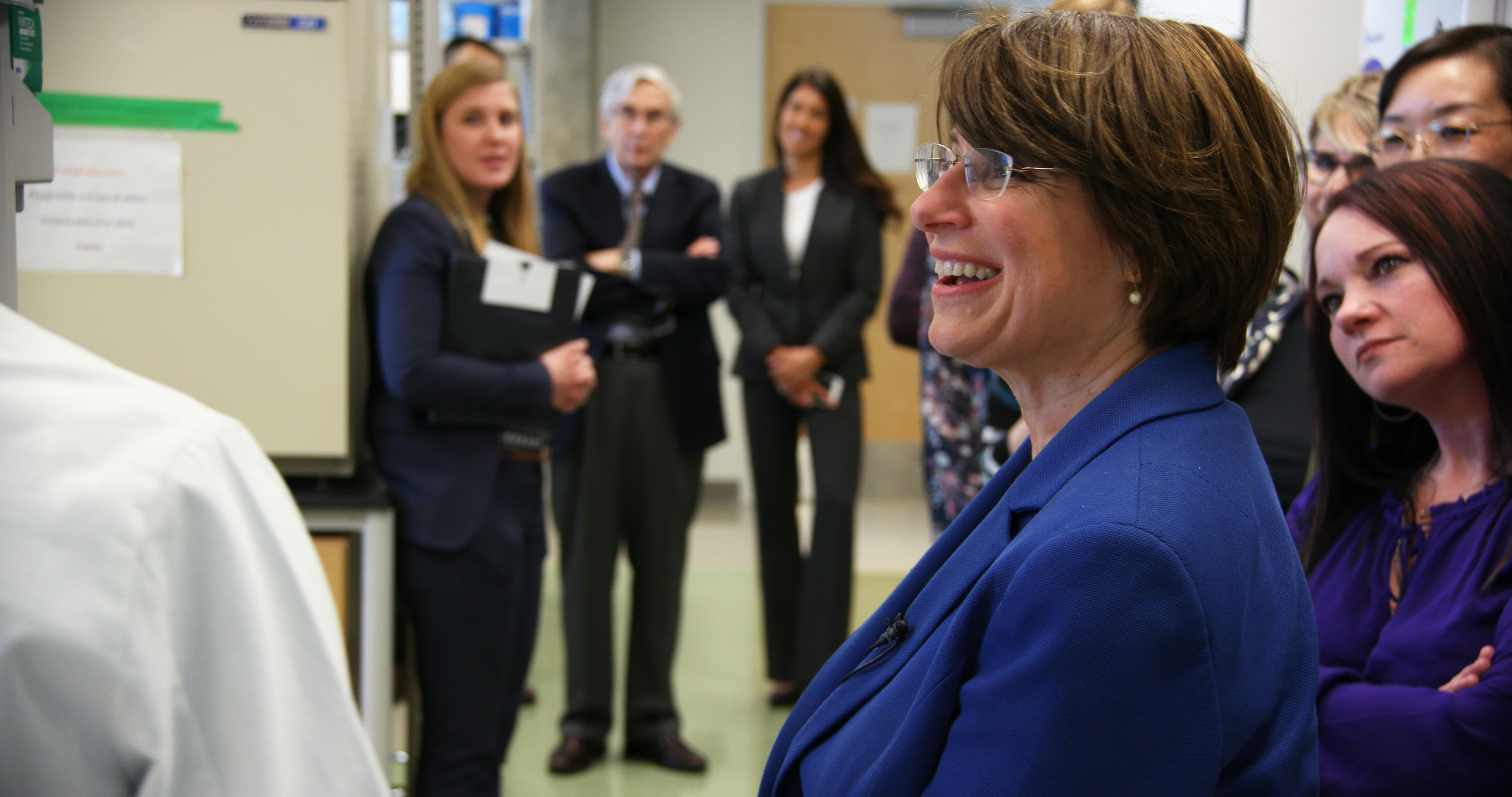 During a tour of his lab, Lesné showed Sen. Klobuchar examples of imaging analyses of amyloid-beta and tau proteins, which are known to induce and mediate synaptic dysfunction in Alzheimer’s disease, as well as a brief movie illustrating the abnormal activity of neurons when exposed to toxins purified from Alzheimer’s disease brain tissue, called amyloid-beta oligomers. The senator was also shown fluorescent amyloid-beta deposits surrounded by activated astrocytes, another cell type involved in neuroinflammation and neuroprotection, in the brain of a mouse model of Alzheimer’s disease using confocal microscopy.

“There’s a lot of great teamwork,” said Sen. Klobuchar of what she saw. “That incredible draw of the experience from all over the world, getting the best researchers to work on this. I am just so pleased we’ve got some federal funding coming here to the U.”

Lesné agrees that funding is important to continue the great work already happening at the University of Minnesota Medical School. Within the Institute of Translational Neuroscience, including the N. Bud Grossman Center for Memory Research and Care as well as the Center for Neurodegenerative Disease, the goal is to leverage new discoveries facilitated by this latest NIH budget increase to develop effective treatments that alter disease progression and, one day, a cure. 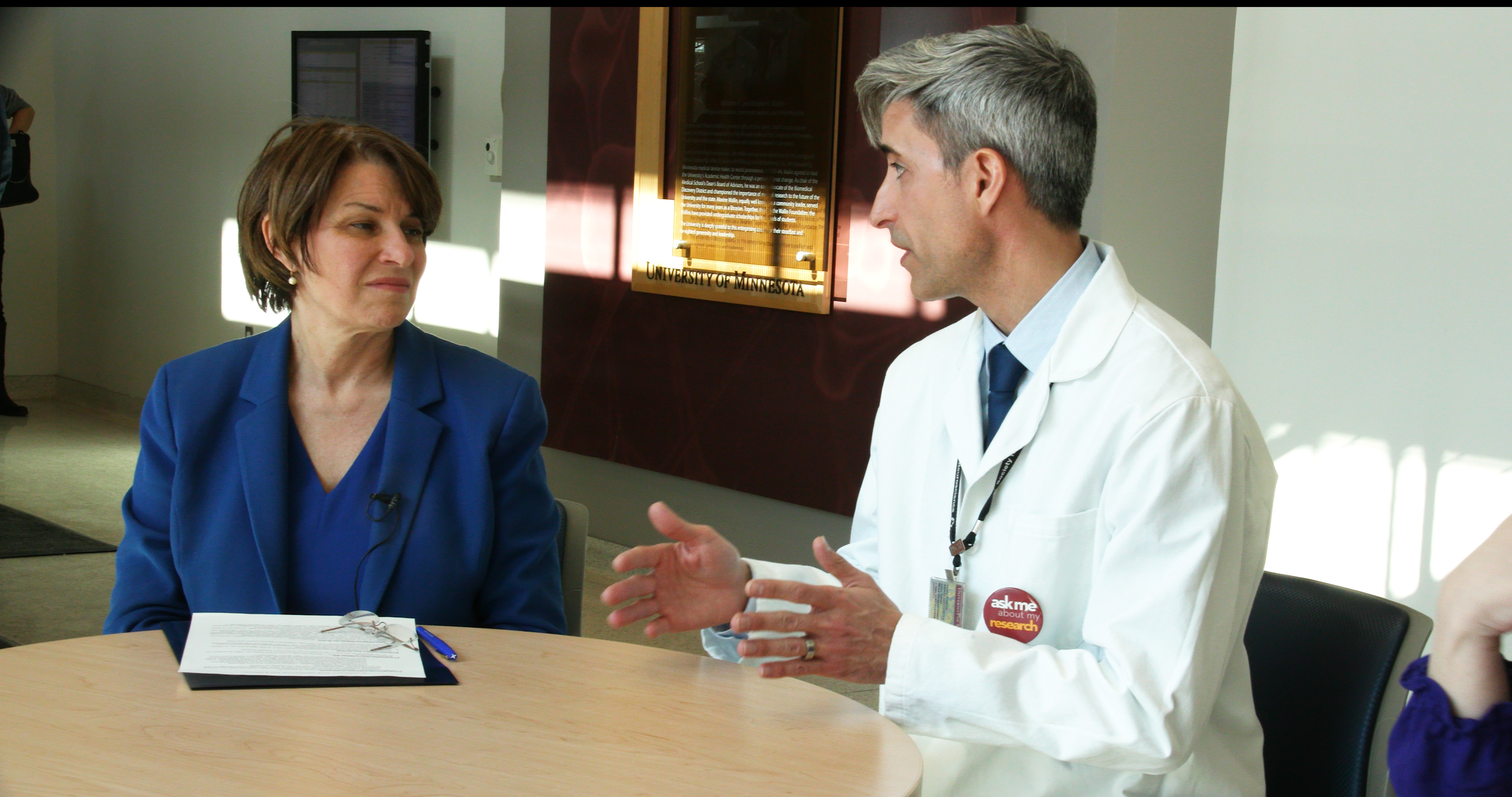 UMN research studies published last year in the journals Nature Medicine, Science Signaling and the Proceedings of the National Academy of Sciences have set the foundations for novel therapeutic interventions currently being developed in UMN laboratories.

“This funding increase will facilitate this transition and accelerate the rate of success to find effective treatments,” said Lesné. “I am extremely grateful to Senator Klobuchar for her vision, efforts and passion in creating initiatives to find solutions to the Alzheimer crisis we are currently facing, which affects numerous Minnesotan families.”