No longer will bandages only serve to protect open wounds from infection—at least that’s the goal of one interdisciplinary team of researchers and providers from the University of Minnesota and M Health Fairview.

The team’s interdisciplinary research, recently funded by the Office of Academic Clinical Affairs’ BOLD Ideas Grant program, builds upon an early prototype—a “smart bandage”—that can detect disfiguring, debilitating and, sometimes, deadly pressure ulcers that form during long surgeries or medically induced comas. Part of the research involves consulting and testing of the prototype by U of M Medical School faculty.

The idea began in another lab more than 2,000 miles away. Sarah Swisher, PhD, who is an assistant professor in the College of Science and Engineering’s Department of Electrical and Computer Engineering, first started researching and prototyping a “smart bandage” concept in partnership with researchers and providers at the University of California, Berkeley, and the University of California, San Francisco, while she earned her doctorate degree. When she moved to Minnesota, she packed up the idea to continue her research at the U.

“And, I think this is the perfect place to work on it. I have high hopes,” Dr. Swisher said.

“The hair on the back of my neck stands up when we talk about this because it would be a game-changer,” Dr. Steiner said. “These pressure wounds and pressure ulcers are so incredibly common and can even be fatal if they become infected and the patient develops a total body infection. Pressure ulcers are one of those big things that everybody is focusing on reducing, and this ‘smart bandage’ can be hugely impactful if it works to the extent that we think it does.” 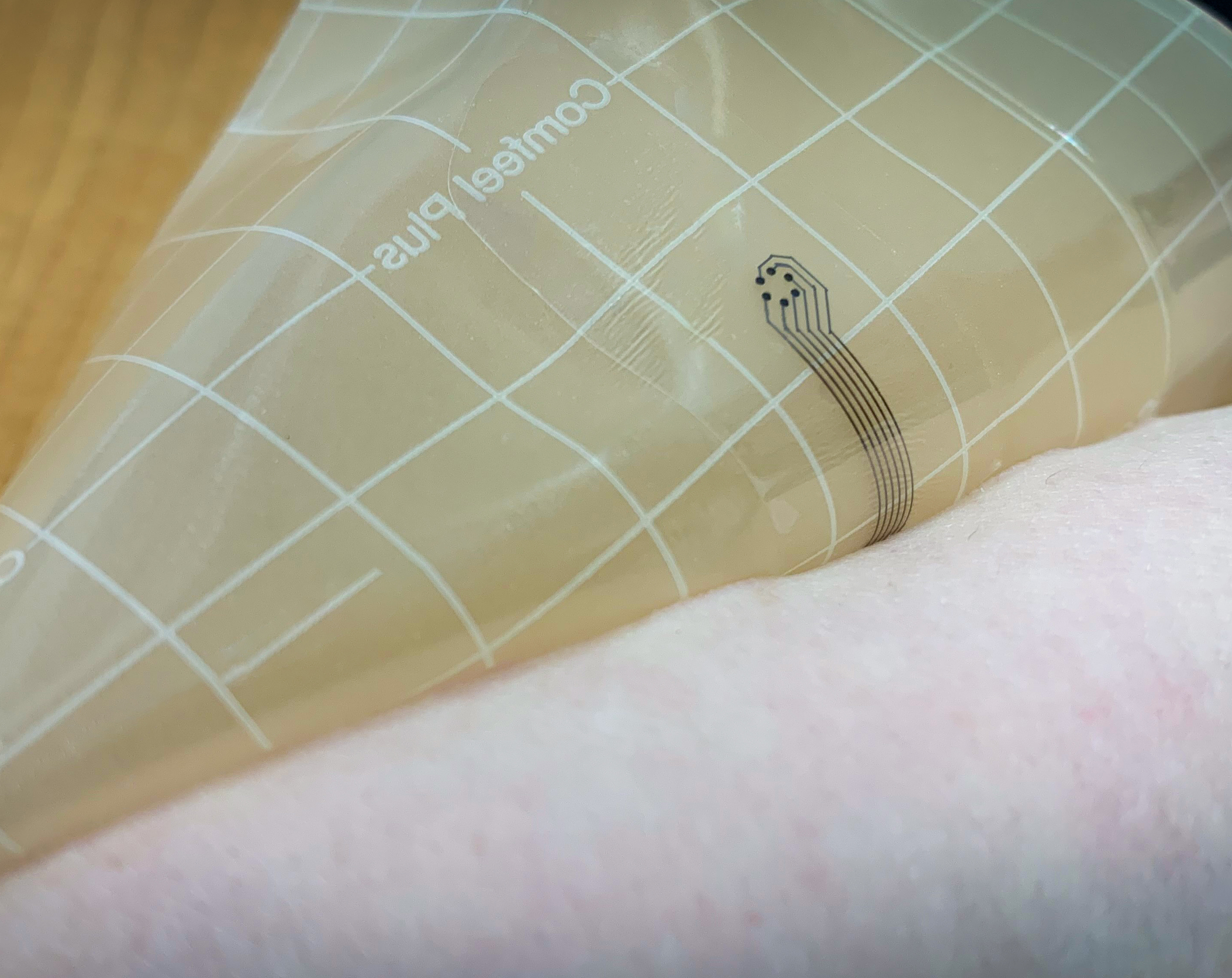 So far, in previous testing, the “smart bandage” has worked. Each bandage is printed in Dr. Swisher’s lab on a specialized inkjet printer. Instead of using dye, the design is printed with gold or silver-based ink onto a thin, flexible piece of plastic that is affixed to a traditional wound dressing or bandage.

“If we want to spread the sensors out and measure a bigger area, we can fabricate them really easy, quickly and at low-cost in my lab,” Dr. Swisher said.

These sensors, connected to a measuring instrument, send small electrical currents through the bandage and the tissue to measure impedance (or resistance). Each sensor node on the bandage creates a map of impedance across the area of the skin to determine whether the skin is healthy or damaged.

“It’s essentially measuring how the tissue responds to a very small amount of current that goes through it. What we’ve found in previous studies is that the response, or the impedance of the tissue, is correlated with the development of these ulcers,” Dr. Swisher said.

This will provide actionable information to providers that helps them assess risk when trying to prevent these ulcers, especially for Dr. Steiner who works with more vulnerable patients, such as those in the NICU and PICU/CVICU.

“Not only does it show you tissue that’s weaker but it also shows you tissues that aren’t being injured, so that you can avoid doing something potentially risky, like moving or repositioning someone, if they don’t have any injuries starting,” Dr. Steiner said. “It will also help you determine, through these impedance changes in the tissues, if the wounds are starting to heal. Then, you would know if you were doing the right thing to promote healing.”

Now that the research proves the underlying link—the “smart bandage” collects data that correlates with the development of pressure ulcers—the next steps for the team involve redesigning the prototype to meet the needs of providers and to collect data in real-time.

Currently, the bandage is connected through intricate control circuitry that must be plugged into batteries and a large measuring instrument. It’s big, clunky and fragile, and Dr. Swisher says Dr. Beilman and other Medical School faculty on the team will help inform the look and feel of the bandage itself.

“We need to get this into a system that we can hand off to Dr. Beilman and his team where they can do further studies and collect a large amount of data—from what it looks like and how it behaves,” Dr. Swisher said.

Testing will help them determine the type of material needed, as well as shapes and sizes of the bandage, so that it has the ability to adhere to patients for hours, days, a week or more. Another key element in the redesign is adding technology that measures the tissue impedance in real-time. In previous studies, the data collected during testing couldn’t be analyzed as it was captured. Medical School faculty on the team informed Dr. Swisher about their desire for real-time feedback, so that when the bandage is applied to their patients, they know right away if something is wrong.

“We need to analyze data in real-time so that this bandage works regardless of the differences in patient populations, types of wounds and locations on the body,” Dr. Swisher said. “All of that is going to take a lot more data so we can see the bigger picture of the variations in tissue impedance and to see how we can do that analysis in real-time.”

Dr. Swisher and the team will be revising prototype designs over the next few months. She expects future testing with Dr. Beilman and other Medical School faculty to begin in the next several months or within a year.