Caring for patients goes beyond quickly diagnosing, treating and curing whatever ailment comes their way. Today’s patients seek more out of the word “caring,” hoping for compassion and communication—simple humanism.

The phrase “keeping healthcare human” comes from the Gold Foundation. The organization started the Gold Humanism Honor Society (GHHS) in 2002, which has grown to include more than 35,000 medical students, physicians and other leaders in 160 chapters housed at medical schools and residency programs across the nation.

One of the earliest chapters to launch in the U.S. was in 2004 at the University of Minnesota Medical School with the help of the late John Song, MD, MPH, MAT, who taught in the Department of Medicine and Center for Bioethics. Now, 15 years later, the student group is receiving recognition as a “2019 Distinguished Chapter” for their efforts in personifying humanism at the Medical School. 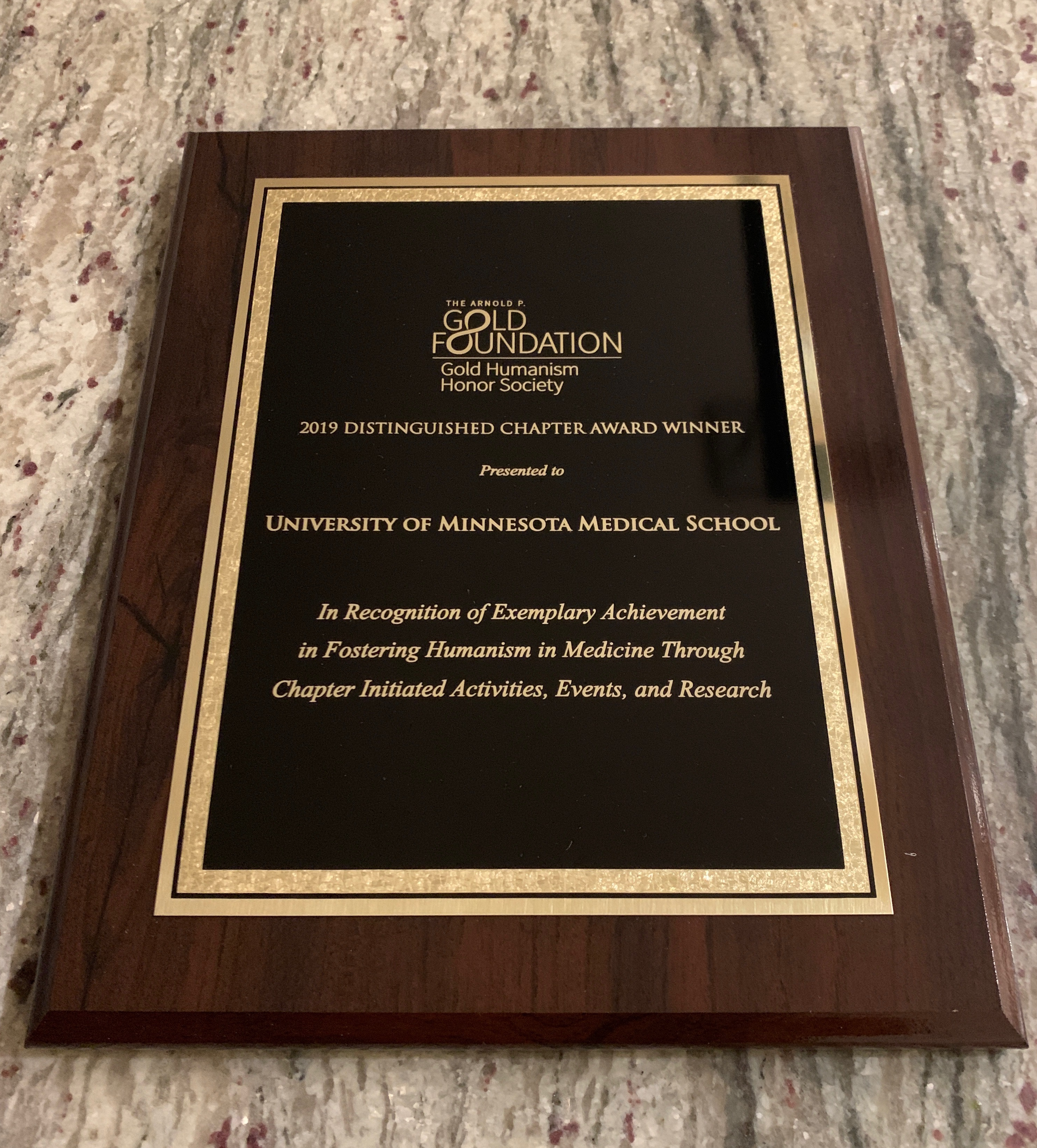 “Humanism is important in medicine. It’s vital,” said Jessica Flores Casey, a fourth-year medical student and GHHS member. “Medicine is a service for other people. Some may see it as a profession that distinguishes us in a higher manner or prestige, but really it is a profession of service, and our chapter is one tool that will make us better providers.”

A golden ticket to residency

The Medical School chapter exclusively admits fourth-year students who are voted in by their peers through a survey during their third year. The survey asks questions like, “What person would I trust to take care of my parents?” and “If I had a secret, what person would I feel most comfortable sharing it with?” All of the votes are tallied to induct the students with the most votes. However, the group membership can only be 15% of the class, which is roughly 38 students every year.

“In recent years, there has been data showing that many residency directors value GHHS membership in student applicants greater than membership in academic honor societies. This is not the purpose of the group, but it likely will help students match into residency since this is now valued so,” said David Power, MBBS, MPH, who is a professor in the Department of Family Medicine and Community Health and is a co-advisor to the Medical School’s GHHS chapter. “For future residents, program directors are often more interested in team players and compassionate people than in high exam scores. Basically, it is a professional endorsement that our students are good people. It’s almost like a golden ticket to residency.”

Caring for yourself to better care for others

Students lead the chapter, hosting community projects throughout the year, including two projects that Gold Foundation leaders asked them to present at the national Gold Humanism Summit in late October. These projects embed in students a sense of humanism focused on caring for others but also breed the necessity to care for themselves first.

One project, Laundry Love, started five years ago as an opportunity to interact with the local Minneapolis community. Every month on a Tuesday evening, a handful of medical students visit a laundromat in the southern part of the city and provide change to cover the cost of patrons’ laundry needs.

Back on campus, the chapter also hosts a Mental Health Awareness Conference in the spring each year. The evening event leads a series of open discussions among students, residents and attendings that raise awareness, eliminate stigma and increase access to mental health resources.

“When we were presenting about these events at the Gold Humanism Summit, there were very interested individuals both from administration in other medical schools and other students,” Flores Casey said. “We received an outcry of positivity from them about how they wish or want to implement something like this at their school, and it reinforced how lucky I am to be a part of an institution that supports our work.”

“Valuing Humanism is not a foreign notion to anyone at this Medical School,” Power said. “We want to produce graduates with humanism. We don’t want burned out, cynical graduates who are brilliant at taking tests. Our chapter and its efforts are very much consistent with the overall goals of the Medical School to produce caring individuals who care for others, including themselves.”