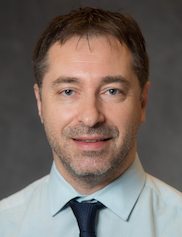 Fellowship in Dermatopathology, University of Miami Miller School of Medicine, 2017

Dr. Giubellino is an anatomic pathologist and dermatopathologist whose current research is focused on understanding the molecular mechanisms and signaling pathways in melanoma with the goal of developing predictive biomarkers and combination therapies for the disease. He employs molecular and cellular techniques and immunohistochemical analysis of tissue samples to bridge basic science and clinical medicine.

Giubellino’s research in Italy and at the National Cancer institute laid the foundation for his current studies of melanoma. With his colleagues, he investigated c-Met, a tyrosine-kinase receptor protein encoded by the MET gene. When bound by its ligand hepatocyte growth factor (HGF), c-Met activates a wide range of cellular signaling pathways including those important in cellular proliferation, motility, migration, and tissue development and invasion. Giubellino’s chief interest is the growing evidence of c-Met’s role in cancer metastasis, which can turn early-stage noninvasive in situ melanoma into a deadly disease. Although none has received FDA approval, c-Met inhibitors hold promise for arresting advanced metastasis and also minimal residual disease in which small numbers of melanoma cells with metastatic potential remain dormant in the patient following treatment.

Melanoma is very complex disease with multiple chromosomal and genetic aberrations and a cascade of cell-signaling pathways. Giubellino is developing a research program designed to identify key molecules and pathways responsible for melanoma metastasis, use the data to subclassify the disease and stratify patients, and target and disrupt metastatic networks with small-molecule drugs. He and fellow researchers have investigated the effect of c-Met kinase receptor on downstream effectors such as Grb2 and adaptors proteins, signal transduction molecules that may serve as targets for small-molecule drug disruption of the signaling network. Giubellino’s ultimate goal is to combine classical protein kinase receptor-targeted drug therapy with checkpoint blockade immunotherapy, which received FDA approval for metastatic melanoma in 2011. Molecular and cellular studies, animal testing, and human trials will determine whether the combination strategy Giubellino plans to undertake provides a therapeutic synergy that is superior to targeted therapy or immunotherapy alone.

Giubellino’s basic research investigation of metastatic melanoma networks dovetails with his clinical studies of patient samples. Results from immunohistochemical staining of tissue specimens can be correlated with results from molecular and genetic analysis, giving the dermatopathologist a more complete picture of the disease. Giubellino thinks this comprehensive approach will reveal predictive biomarkers in metastatic melanoma that can indicate whether and how a patient will respond to specific therapies, a key goal of personalized medicine.