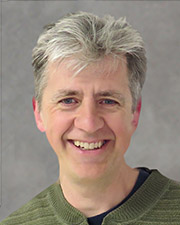 Dr. Koob is a member of the Division of Molecular Pathology and Genomics. His laboratory develops novel tools for engineering the genomes of laboratory animals to learn how genes that cause mitochondrial and neurodegenerative diseases function. These tools allow researchers to transfer the lengthy human DNA sequences of disease-causing genes into mice and track their function and create transgenic mice carrying human genes with consistent marker mutations so they can be tracked through tissue development and growth.

Beginning with cell line research, Koop and his colleagues have now developed full mouse models in which the mitochondrial content of cells can be precisely controlled. They are using these models to study multiple sclerosis (MS), which can be artificially induced in mice. Different strains of mice with different mitochondrial genes are differentially susceptible to induced MS, suggesting that cellular mitochondria constitute the genetic susceptibility locus for the disease. They are working on a model that can control the cell types such as T-cells that may be involved in addition to the oligodendrocytes that MS disables. In MS, mismanaged protein accumulates in the endoplasmic reticulum (ER). The tight ER-mitochondria interface may include a signaling pathway for mitochondrial involvement in MS, which a good animal model can help to identify. Koob is using restriction enzymes that cut DNA differentially in different mouse strains, heteroplastic mice with different mitochondrial genomes, and a variant of the cre-lox recombination system (flox) to identify the specific cell types involved. Molecular tools are now available to pave the way for genetic therapy of mitochondrial diseases following animal studies.

As a faculty researcher in the Institute for Translational Neuroscience, Koob is collaborating with among others Karen Hsiao Ashe who developed a mouse model for Alzheimer’s disease in the 1990s. Koob’s team can engineer specific mutations in the Alzheimer’s gene that are reproducible through successive generations of laboratory mice, allowing them to control for the “noise” of genetic variation. The technique they developed using engineered bacterial plasmids which they put into mouse embryonic stem cells allows them to transfer larger intact segments of human DNA into mice than has previously been possible including expanded trinucleotide repeat sequences found in ataxias and Huntington’s disease.

In collaboration with researchers at the Mayo Clinic, Koob is developing a mouse model for a fairly common corneal dystrophy disease whose causative gene is characterized by an unstable expanded trinucleotide repeat. Using bacterial artificial chromosomes (BACs) and engineered plasmids, Koob’s team has developed a technique that can replace unexpanded trinucleotide repeats with the expanded variants found in neurodegenerative and neuromuscular diseases and related diseases like corneal dystrophy.