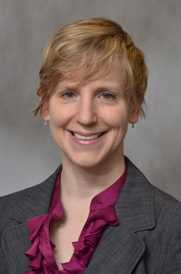 University of Pittsburgh School of Medicine (Breast and Gynecologic Pathology), 2010-2011

Dr. Klein is an anatomic pathologist with research interests in breast and gynecologic diseases and the application of technology to disease diagnosis, prognosis, and therapy. Klein and her colleagues conducted a study of Oncotype DX, a widely-used commercial assay for making chemotherapy decisions in estrogen receptor (ER)-positive breast cancers, to compare the combined prognostic / predictive power of standard histology and immunohistochemical markers with Oncotype DX assay. Using equations they developed, they found a strong correlation between standard pathology results and the Oncotype DX assay score. They suggested that in some if not many cases standard pathology markers plus the use of pathology-generated equations derived by linear regression analysis constitute an accurate and cost-effective substitute for the commercial assay. Klein and fellow investigators have also explored quality assurance issues concerning the Oncotype DX assay, specifically the false negatives associated with the assay’s detection of HER2 (ERBB2), an important prognostic and predictive marker in breast carcinoma.