The true impacts — socially, emotionally, physically, mentally — have all yet to be seen in this approaching post-pandemic world. Data suggests that many, for the very first time, have experienced the internal struggles due to mental health ailments, adding to the working definition of “Long COVID.” Physicians and patients alike are in need of solutions, now.

But even before this new spike in mental health diagnoses, the University of Minnesota Medical School had positioned itself to be a problem-solver in this field by leveraging a critical scientific blend of neuroscience and psychiatry. After a few years of sharing ideas and working together, an interdisciplinary faculty collaborative, known as NeuroPlasticity Research in Support of Mental Health (NeuroPRSMH), earned a $15 million Silvio O. Conte Center P50 grant from the National Institute of Mental Health (NIMH) in the spring of 2019.

“It was remarkably hard work but the process was always completely organic,” says Sophia Vinogradov, MD, a professor and the head of the Department of Psychiatry and Behavioral Sciences. “There was something unique about how this group generated novel ideas, and we learned a lot from it.”

Dr. Vinogradov and David Redish, PhD, a Distinguished McKnight University professor in the Department of Neuroscience, co-facilitate the research under the grant, which aims to better understand psychosis. They share the four fundamental elements that helped their group secure one of the largest grants available through the National Institutes of Health:

Have a genuine curiosity in the research of others

Build a team of diverse experts and listen

Narrow in on a topic and focus

Be comfortable with scrapping ideas and starting over

Have a Genuine Curiosity in the Research of Others 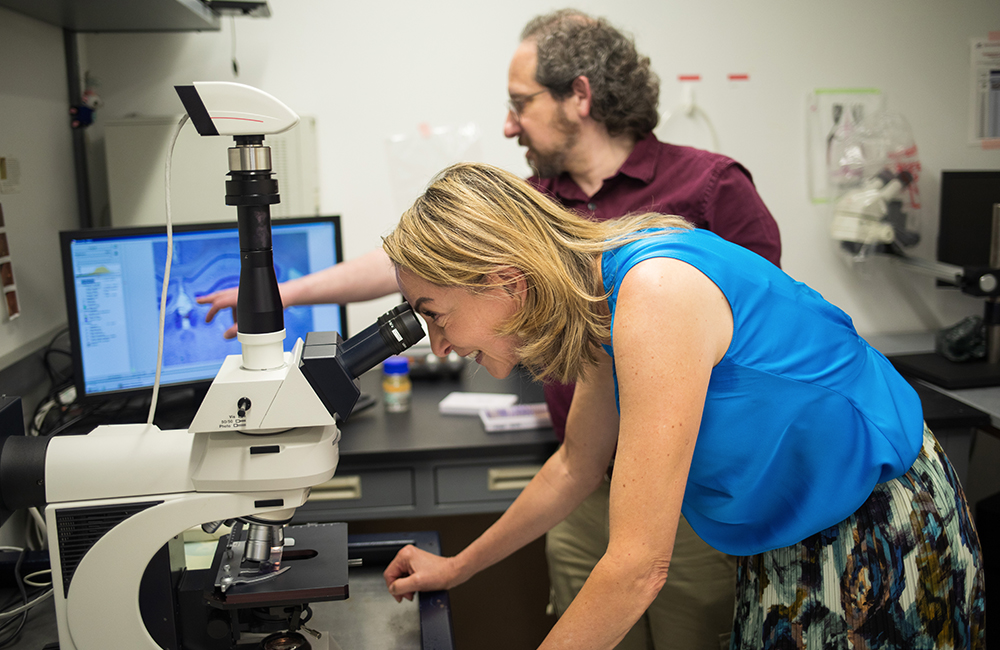 The first and critical step in forming their collaborative group involved genuine curiosity. After Dr. Vinogradov arrived at the U of M Medical School in 2016, she had heard about Dr. Redish’s work and invited him to speak at her department’s Grand Rounds.

“I think I got a dozen people after that saying, ‘Let’s collaborate,’” Dr. Redish recalls.

And, they did. Drs. Redish and Vinogradov brought together this newly interested group of faculty — some clinical, some basic science — all of whom showed a curiosity outside of their own scope of work that brought NeuroPRSMH to life.

Today, it’s often hard for people to slow down and be genuinely curious about something going on outside of their lane. But, that was not the case here at all,” Dr. Vinogradov said. “We had this early excitement and enthusiasm about how we could learn from each other. And, out of that, grew these ideas for the grant.

Both professors recommend initiating conversations with other researchers without the mindset of, “What can I get out of this?” Instead, they suggest approaching collaborations with the  intentional desire to simply understand the other person’s research.

Build a Team of Diverse Experts and Listen

While Drs. Redish and Vinogradov are the principal investigators on the grant, the funding supports six projects and cores that are led by a diverse, interdisciplinary team. 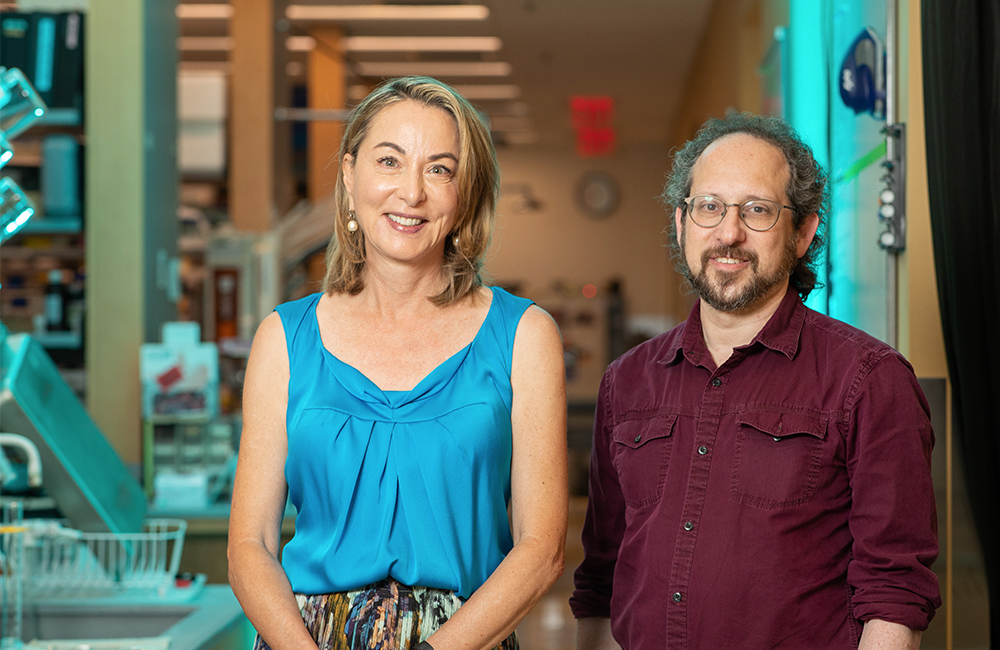 “We co-facilitate the center, and I love that word because it speaks to the fact that it’s not our center by any stretch of the imagination,” Dr. Redish says.

NeuroPRSMH boasts a strong group of 30 faculty members from neuroscience, psychiatry, psychology, health informatics and imaging, from across the U of M.

“We diversified our teams with some of the most junior faculty, who have just as important of a voice as we do in the group discussions. In fact, I think their voices can be more important because they're fresher, newer and not in the same rut as some of us who are further in our careers,” Dr. Vinogradov says.

But, having voices and hearing voices are different verbs. Both professors say truly listening to the diverse perspectives within the collaborative keeps the team glued together — and spurs some of the best ideas.

Dr. Vinogradov set a model early on within the group — she is incredibly generous and always insists on making sure that everybody is speaking and everybody is listening,” Dr. Redish says. “Setting that example has ensured that nobody's dominating the conversation, and it’s made all the difference in our work.

Narrow In on a Topic and Focus

Once the group starts talking, dozens, if not hundreds, of ideas will begin to form. Both professors embarrassingly recall their first submission.

“We wrote this grand vision — we wanted to do everything, and the NIMH program officer was like, ‘Yeah, no,’” Dr. Redish says.

“Well, it was too scattered,” Dr. Vinogradov adds with a laugh. “Our biggest challenge was finding the one aspect that we could write as a linear goal.”

To do that, Dr. Vinogradov says it required every team member to “check their egos at the door.”

“Once we knew we needed to narrow in, the process was remarkably free of, ‘You’re trying to constrain my ideas,’ or ‘Who holds the power?’” she says. “We worked together to identify similarities between everyone’s research and find the singular strength and focus of what we would do.”

Be Comfortable with Scrapping Ideas and Starting Over 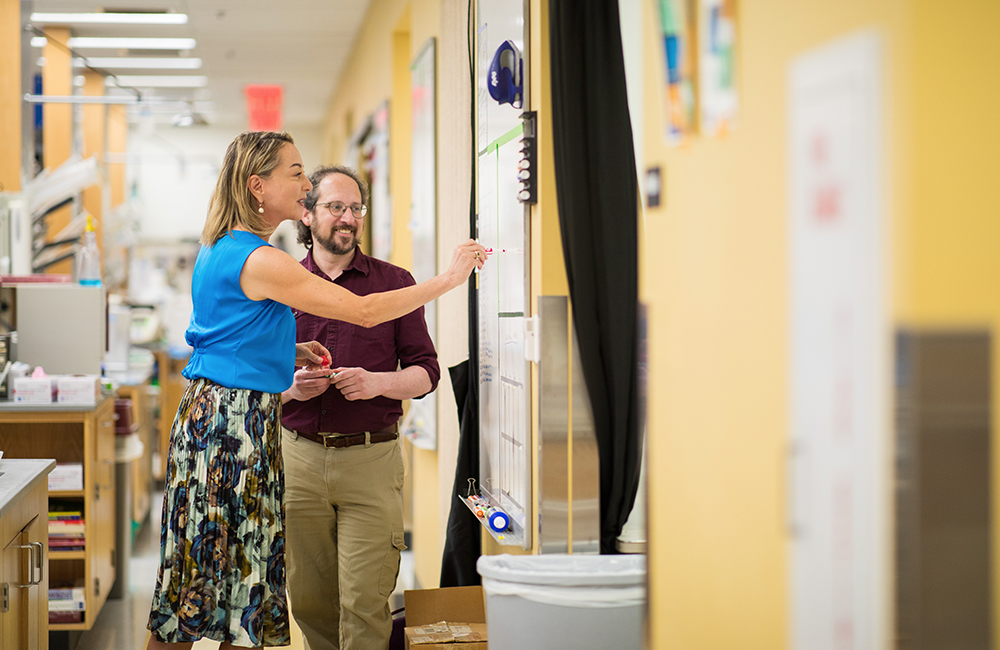 Losing the ego also benefited other areas of the grant process – writing and editing.

“I tell my students that they have to get to a point where they’re comfortable with writing 10 pages, and then completely scrapping all of that work to start over because the idea wasn’t right,” Dr. Redish says. “There's always some protective ownership over work when time has been invested, but we have to realize that, sometimes, our ideas aren’t right, and we need to start back at square one.”

While writing, Dr. Vinogradov says that willingness to be flexible and to understand should extend to others reviewing your sections.

“The entire team read and critiqued each other's writing. We would say that we didn't understand this or would ask it to be rewritten in a more clear way. None of us allowed ourselves to get offended by criticism because we knew that it was about making the grant — and, more importantly, the science — better,” she says.

A new $15 million Silvio O. Conte Center grant from the National Institute of Mental Health (NIMH) has given lead researchers the green light at the University of Minnesota Medical School to conduct a new type of research that could reveal better ways to treat one of the most mysterious mental health diagnoses — psychosis. The U joins only a handful of other Conte Centers across the country.

Meeting of the Minds

Psychiatrists treat depression, anxiety, psychosis, and a host of other conditions, without a firm grasp of what’s happening — and, more importantly, what’s going wrong — inside the brain. Neuroscientists, on the other hand, work to unravel the complex web of connections between cells in the brain, but are often one step removed from applying those understandings to patients. Too rarely do experts from both fields join forces. But, that’s changing.