Growing up, discussing human evolutionary anatomy at the dinner table was an evening occurrence for Alexandra Zachwieja, PhD, assistant professor in the Department of Biomedical Sciences at the University of Minnesota Medical School, Duluth Campus. “My dad was a seventh-grade biology teacher, so he also loved talking about it,” Dr. Zachwieja said. “There’s a lot we can learn from unpacking the deep-time relationship between humans and how adapting to our environments have shaped us.”

As a biological anthropologist, Dr. Zachwieja trains in whole-body human evolutionary anatomy. Her approach to the classroom blends her previous international research on human origins, providing a new perspective on how climate, environment and competition for resources may have influenced early humans and their structural anatomy.

Before coming to the Medical School, Dr. Zachwieja spent years teaching gross anatomy at the University of Illinois at Urbana-Champaign, where she was part of an international team of researchers conducting human origins excavations with the Lao Ministry of Heritage, Culture and Tourism, in partnership with the French National Centre for Scientific Research (CNRS) and the Musee de l’Homme, Paris.

“My past research experience has been looking at how various influences affect human movement in terms of changes in bone and cross-sectional geometry,” Dr. Zachwieja said. “With my training in human evolutionary anatomy, being able to instruct the anatomy curriculum is the best of both worlds.”

Remaining untouched for 90 years, Laotian archaeologist Thongsa Sayavongkhamdy rediscovered a unique site, located on the Pa Hang mountain, where excavations of human remains had been conducted during the 1930s. What was once thought to be lost to the jungle, resulted in new excavation projects that started in the early 2000s – and still continues today. A milestone for human fossil records in mainland Southeast Asia, the rediscovered site also proved an opportunity to research additional variables that influenced human land use.

“For years, my research has focused on human movement, examining how aspects of our environment have impacted how we move across the globe,” Dr. Zachwieja said. “Little has been done to apply these types of modeling to past humans and Neandertals in Africa and in Europe, but it never has been done in Southeast Asia.”

Led by Dr. Zachwieja, her recent research published in the journal, Quaternary International has become an important piece of data recently contributed to human origins. Specializing in the regions of Southeast Asia, Dr. Zachwieja was drawn to the opportunity to study such a unique environment. “It’s always been tropical, even during the most intense glacial periods on our planet,” Dr. Zachwieja explained. “The way the environment affects how people move in this region could be completely different from how we think about how it affected people in Europe, Africa and other parts of Asia.”

Through different computer simulations, called Ecological Niche Models (ENM), researchers are able to add data from known present sites of a species to predict, in this case, where humans might have settled on a land preference. In search of understanding the ancient pathways of early humans in Southeast Asia, Dr. Zachwieja incorporated an additional proxy based on prey to identify if both humans and other predators were interacting with one another and if they were eating the same things.

The results were rather surprising, showing that competition for resources did not heavily influence human dispersal patterns in Southeast Asia compared to other global influences such as terrain, temperature and precipitation. “They were certainly experiencing competition, so the question becomes, what other nuances are missing simply because there’s not enough data for this location?” Dr. Zachwieja said. “I’m convinced that it’s not just the climate aspect of our environment that affects us.”

A Focus on Climate Change

Dr. Zachwieja explains that while we are in a completely different world than our ancestors, the issues remain the same, such as the land’s ability to cultivate enough food for the community and providing clean water. “These determinants have been with us for thousands of years and it’s not going to change,” Dr. Zachwieja said. “It’s about time we start dealing with it.”

By having this type of anthropological perspective on human anatomy, Dr. Zachwieja believes it will prepare students to discuss future health issues between humans and important factors of our environment, such as increasing issues of access to freshwater impacted by global warming and climate change.

“Doing research like this is very exciting, but it’s also very important to me that this research matters,” Dr. Zachwieja said. “I think what could be helpful is gaining a better understanding of the human experience with climate change throughout time.” 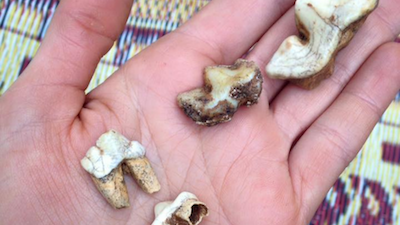