Dr. Demetri Yannopoulos is the director and mind behind the first-of-its-kind emergency vehicle designed to improve outcomes for patients in cardiac arrest

July marked the first deployment of the University of Minnesota Medical School Center for Resuscitation Medicine’s mobile ECMO truck, the world’s first highly specialized emergency vehicle focused on cardiovascular emergencies. On the truck, a medical team cannulates patients and hooks them up to an extracorporeal membrane oxygenation (ECMO) machine, which pumps and oxygenates blood outside of the body, doing the work of the heart and lungs while medical teams treat those organs.

Dr. Demetri Yannopoulos, MD, director of the Center for Resuscitation Medicine and professor at the Medical School, had the idea for the truck in 2017. He wrote his thoughts down on a paper towel before meeting with the Leona M. and Harry B. Helmsley Charitable Trust. The goal was to improve patient outcomes equitably.

“When a patient has a cardiac arrest, every minute delay in care leads to a 2% increased chance of dying,” Dr. Yannopoulos explains. “If you have great hospitals that are only in good neighborhoods, it’s very difficult for people that don’t have the means to go there. But with this truck, we can go and deliver that care wherever the patient needs it.”

A team of engineers and mechanics began building the truck in 2019. All the medical equipment needed was available commercially, but designing the vehicle itself was complicated, and the truck needed to be foolproof.

“We have three electrical supply lines,” Dr. Yannopoulos says. “You don’t want to run out of electricity. If the generator drops off, then you have the engine. If the engine fails, you have the batteries. There are infinite redundancies, but you have to have that because somebody’s life depends on it.”

The team also had to figure out how to control the vehicle’s temperature despite Minnesota’s extreme weather, and ensure that the heavy, expensive medical equipment stayed secure during travel. When all was said and done, the truck cost nearly $1.8 million.

Housed at the Edina Fire Department, the now fully-operational ECMO truck is on-call 24/7. When staff receive a call that the truck is needed, an Edina firefighter drives it to an agreed-upon rendezvous location where they meet up with physicians in their personal emergency vehicles as well as the ambulance carrying the patient. 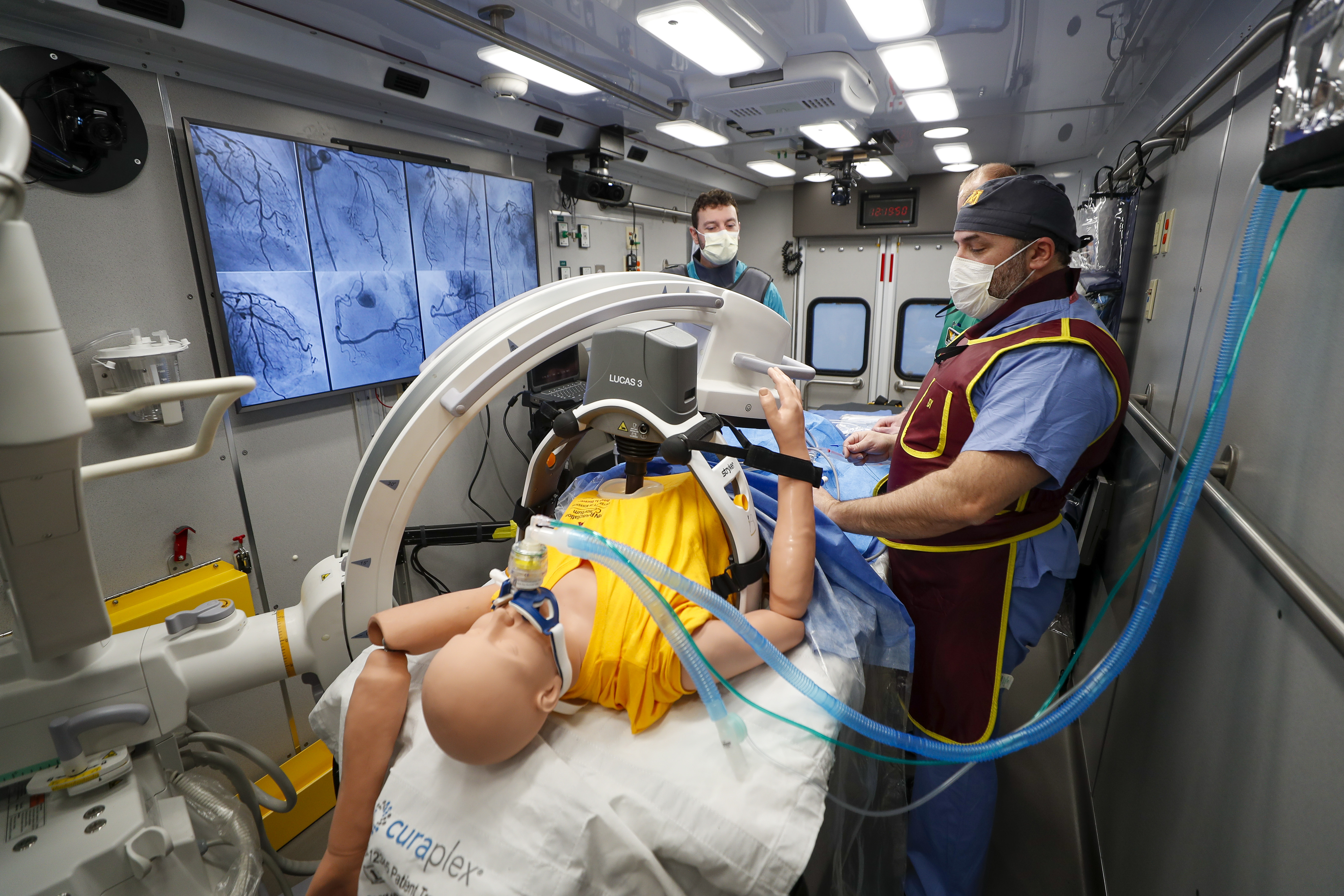 “Let’s say it’ll take the ambulance half an hour to get to the hospital from where the patient is. We meet them halfway and cut down the travel time by 15 minutes. That potentially could increase the chance of the patient surviving by about 30%,” Dr. Yannopoulos describes.

Inside the truck are 3D cameras that Dr. Yannopoulos and the center’s assistant director, Dr. Jason Bartos, MD, PhD, can view from their homes. With these cameras, they can utilize telemedicine to see electrocardiograms and monitor the patient.

Patients generally spend around an hour being treated on the truck and then are moved to a hospital to spend the next several weeks recovering.

Although it’s just starting to make moves in the southwest suburbs, the future of the ECMO truck is bright. Currently, the truck is funded by the Helmsley Charitable Trust through the summer of 2023, but the long-term plan is to be funded by healthcare systems. Dr. Yannopoulos and his team are collecting data on patient outcomes, and, if there is strong evidence that the ECMO truck results in fewer mortalities, funding is already secured to build a second truck.

“This could be, and probably will be, watched by other cities, and the results will affect how emergency response medical teams can change their practices,” Dr. Yannopoulos says. “Do we bring the patient to the hospital, or do we bring the hospital to the patient if it’s safer and faster for them? That’s something that I think is a fundamental question of delivery of care in our field, and I think we have high value for our community.”