He considers it a hobby.

Kamil Ugurbil, PhD, is a professor in the Department of Radiology at the University of Minnesota Medical School who claims a humble privilege in pioneering and leading the Medical School’s Center for Magnetic Resonance Research (CMRR) over the last four decades.

“I say hobby because science and research, for most people involved in it, is not just a job but a passion — just like a hobby,” he says. “It hasn’t been all fun and no pain. There has been quite a bit of pain, but it has been worth it because there have been wonderful gains at the end of it.”

In 1982, after Dr. Ugurbil established his early laboratory on Lake Minnetonka, he began an uncharted journey toward an area of science that most researchers had discredited based on simulations and theories — ultra high-field human imaging.

“But, there was no definitive reason to think that someday we wouldn’t be able to apply them to humans,” he says. 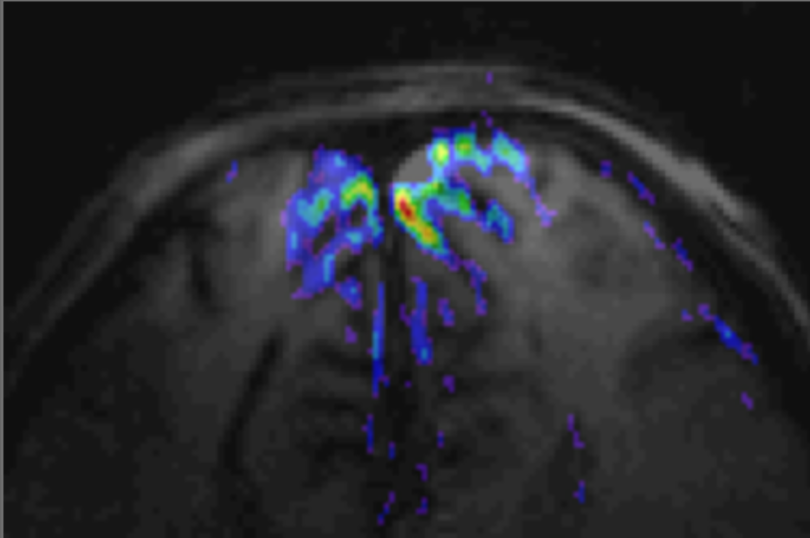 “Someday” happened eight years later, when Dr. Ugurbil and the combined talent of the CMRR — experts in imaging physics, engineering, mathematics and signal processing — produced the world’s very first high-contrast, high-resolution images and the very first functional images of the human brain using a 4 Tesla (4T) scanner (see image to the right). A few years after that, the team built the world’s first 7T scanner.

“That’s a technology initiative that we undertook in 1995, and, now, it is commercially available and the highest magnetic field diagnostic instrument on the market,” Dr. Ugurbil says. “I look back to all of the accomplishments that we have had with enormous pride and certain satisfaction, and I am still very much excited about some of our ongoing projects right now.”

“One of the major limitations of any imaging technology, particularly for MRI, involves the signal-to-noise ratio. It determines more or less the limits of attainable image resolution, being able to differentiate between two different tissue types or being able to detect activity in the brain, which is what we invented in CMRR,” Dr. Ugurbil says. “10.5T is the next level of the most advanced brain research tool under development.”

“The brain operates over a very large scale. You can think about molecules forming cells, many cells forming circuits, and then circuits becoming networks, circuits of circuits,” Dr. Ugurbil says. “It is an organization that is intricate and is composed of many different spatial scales, and we cannot currently access these scales all at the same time with any single imaging technology.”

The 10.5T helps span that scale, merging MRI’s current success in whole-brain imaging with a new strength in providing clearer resolutions at the millimeter or submillimeter scales. Dr. Ugurbil emphasizes, though, that the instrumentation alone is not enough — it takes the talent of experts who specialize in the physics of data acquisition and in the mathematics of image reconstruction to make it work.

“This time, there are followers who aspire to magnetic field strengths higher than what we achieved. Other countries and laboratories around the world are developing scanners in this field now, including two initiatives at an advanced stage that are aiming for 11.7T and there is talk of developing a 14T,” Dr. Ugurbil says. “We’re all working to develop the next generation of human imaging tools.” 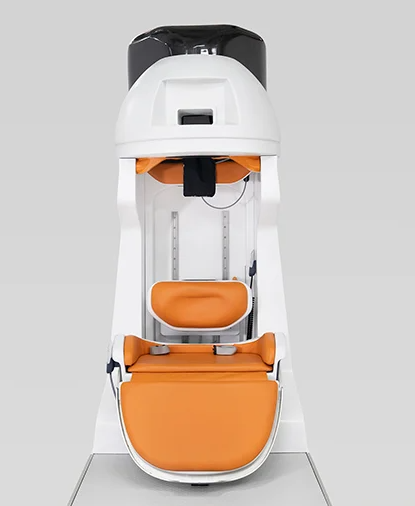 “It looks kind of like a stormtrooper helmet,” laughed Michael Garwood, PhD, a professor in the Department of Radiology and CMRR member. “This portable MRI scanner can be positioned over your head, allowing us to get images of the brain that reflect it’s activity while you interact with the natural world — maybe you’re carrying on a conversation with someone or reaching for an object.”

That type of instrument, pictured to the left (photo credit: Ben Parkinson), can produce more realistic images when studying social interactions and motor coordination. Using a 1.5T magnet — still high-field but lower than normal CMRR pursuits — Dr. Garwood leads an international team focused on developing this first-in-the-world technology. The group, made up of experts from CMRR, Columbia University, Massachussett’s General Hospital, Yale School of Medicine, University of São Paulo at São Carlos, Brazil, and Victoria University of Wellington, New Zealand, received a five-year, $10.8 million NIH BRAIN Initiative grant to develop the magnet, which is expected to be finished in May or June of 2021.

“Beyond research implications, we’re creating a magnet system that is small enough to easily transport, can be turned on and off in a short time and doesn’t need liquid helium (which can be difficult to obtain in some countries), so that we can reach populations of people in very rural or underserved communities,” Dr. Garwood says.

He admits access to portable MRI scanners is beginning to exist for these communities, but it usually involves ultra low-field imaging scanners — at 0.1T or lower — that produce very low-resolution images. Radiologists require a certain level of image quality to confidently diagnose a wide variety of brain disease, which may not be possible with systems “where you get scanned in the back of a van,” Dr. Garwood says.

“If you need to go to rural Africa, and the question is to determine if a child has hydrocephalus, you may get sufficient images for a radiologist to make that diagnosis. But, high-resolution, structural and functional imaging for both research and clinical applications in remote locations will require high quality imaging, possible only with high fields — at 1.5T — and we’re the only ones taking this approach.”

In early discussions with the MIT Sloan School of Management, the team envisioned additional business applications — what if every emergency department owned this portable MRI scanner? Physicians, soon after the arrival of a non-responsive patient, could quickly scan the brain to determine whether or not the patient suffered a stroke.

“You wouldn’t need all of the infrastructure that an MRI requires today,” Dr. Garwood explains. “It could fit in a closet.”

Or, a CVS Pharmacy. The team dreams of how consumer access to this tool could serve a critical role in the prevention, rather than the treatment, of disease.

“If we can make the scanner small and accessible enough, people could get a yearly scan of their brains at an affordable price or covered by insurance, starting at a young age,” Dr. Garwood says.

Those scans, over time, may help pinpoint disease in its early stages, like in Alzheimer’s disease where it’s known that the hippocampus shrinks over time. If people receive yearly scans — and those scans could be compared to one another year-after-year with the help of artificial intelligence — people will be more likely to identify any issues before they worsen.

“That’s what we see as the future of this MRI technology — preventative medicine,” Dr. Garwood said. “You’ll be able to know who’s at risk for what early on, which could inform people to change their lifestyles and seek the right medical help. That’s the long-range future of why we need MRIs that can be small, cheap, and easy-to-locate.”

Parallel to their study of the instrument itself, the team is exploring the ethics and realities involved in employing a portable scanner for research use.

When Dr. Ugurbil considers the future of ultra high-field imaging and CMRR, he talks about focus.

“You cannot do everything,” he says. “While CMRR comes from technology development with a basic science point-of-view, our work has significant clinical applications as well. Our current focus, looking into the future, is to expand the clinical applications of this technology and  continue to expand our capabilities for basic biomedical research not only in the brain but in other organ systems of the human body as well.”

Dr. Ugurbil proposed the Medical Discovery Team on Optical Imaging and Brain Science, which he has been developing together with the Medical School’s Department of Neuroscience. This state-funded, interdisciplinary group of investigators aim to bridge the gap between functional magnetic resonance imaging and optical imaging. CMRR is developing new tools that combine these technologies into one instrument, which will help obtain near-complete wiring diagrams to better identify differences between healthy brains and brains with diseases, such as Alzheimer's, epilepsy, autism, stroke and vascular dementia. The information could lead to more targeted approaches to prevent and treat those diseases — an impact reaching millions of people suffering from neurological, mental health and even substance use disorders.

“These are the new directions that we are trying to send CMRR in now,” he says. “We want to focus on the clinical applications of the unique imaging technologies we have, while we continue advancing the technology, and will nurture this as we go into the future.”

A new study led by Pramod Pisharady, PhD, recently received a five-year, $685,826 grant from the Chan Zuckerberg Initiative. His project aims to bridge the gap between microscopic imaging — the gold standard for tissue microstructure — and MRI — the gold standard for clinical imaging. Dr. Pisharady will propose machine-learning algorithms in order to better detect tissue microstructural alterations in neurodegenerative diseases and improve the early diagnosis, from clinical MRI data, of neurodegenerative diseases, such as Amyotrophic Lateral Sclerosis (ALS), Parkinson's disease and ataxia.

Malgorzata Marjanska, PhD, develops magnetic resonance spectroscopy (MRS) techniques for humans and rodents and applies those techniques to study neurochemical and metabolic alterations in various diseases, like Alzheimer’s disease and depression, as well in brain tumors and during aging. The Fulbright Scholar award makes it possible for her to partner closely with colleagues at the Center for NeuroImaging Research (CENIR) at the Institut du Cerveau et de la Moelle épinière – ICM, Paris, France for six months, where she will expand on her research at CMRR on gliomas, or brain and spinal tumors.

Written in Nature, “The centre’s director, Kamil Ugurbil, had been waiting for years for this day. The magnet faced long delays because the liquid helium needed to fill it was in short supply. After the machine was finally delivered, on a below-freezing day in 2013, it took four years of animal testing and ramping up the field strength before Ugurbil and his colleagues were comfortable sending in the first human.”